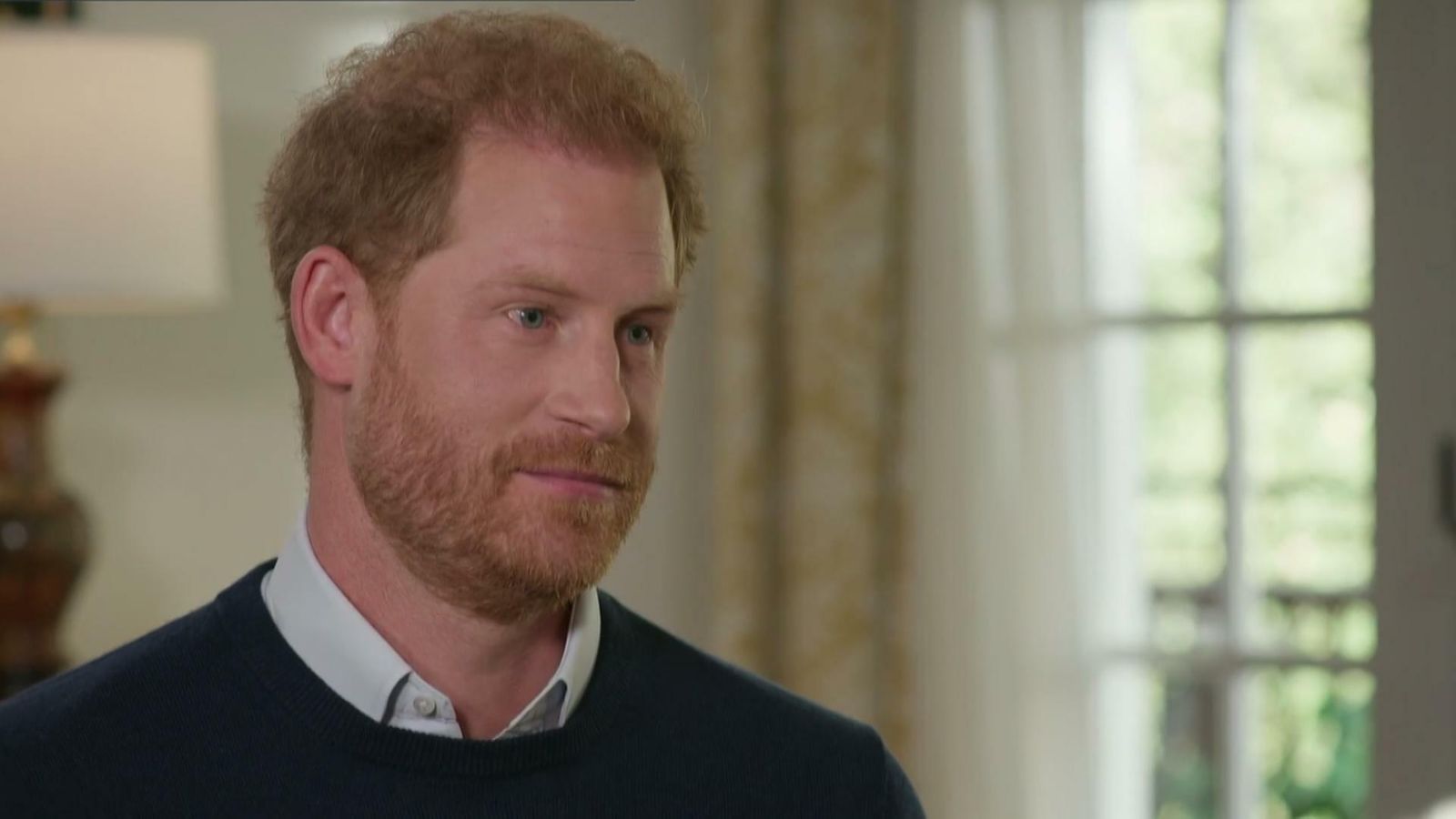 Prince Harry has accused members of the Royal Family of getting in “bed with the devil” over their links with the tabloid press – and admitted Meghan did not get on with William and Kate “from the get-go”.

In an interview with ITV, the Duke of Sussex insisted he did not have “any intention to harm” or “hurt” his brother or King Charles with his memoir Spare, which includes a series of explosive allegations.

He also denied that accusations of racism were made towards the royals when he and Meghan were interviewed by US TV host Oprah Winfrey.

Separately, speaking to US show 60 Minutes, Harry said he once viewed his stepmother Camilla, the Queen Consort, as “the villain” and revealed he was still not speaking to William or Charles.

In a wide-ranging interview with ITV presenter Tom Bradby, Harry said it was “important to acknowledge” his past drug use after he admitted in his book taking cocaine, cannabis and magic mushrooms.

He also claimed there was a “horrible reaction” from his family members on the day that Queen Elizabeth died, with “briefings”, “leaking” and “planting”.

Addressing the “relationship between certain members of the family and the tabloid press”, Harry said: “Those certain members have decided to get in the bed with the devil, right? To rehabilitate their image.

“If you need to do that, or you want to do that, you choose to do that – well, that is a choice. That’s up to you.

“But the moment that rehabilitation comes at the detriment of others – me, other members of my family – then that’s where I draw the line.”

Harry accused of being ‘scathing’ about Camilla

Bradby suggested to Harry that he was “pretty consistently scathing” in his memoir about his “stepmother and the press”.

An excerpt read by Harry from his book said he and William “endorse Camilla” but they asked their father Charles not to marry her.

“Shortly after our private summits with her, she began to play the long game,” Harry writes.

“A campaign aimed at marriage, and eventually the Crown, with Pa’s blessing we presumed.

“Stories began to appear everywhere in all the papers about her private conversation with Willie, stories that contained pinpoint accurate details, none of which had come from Willie, of course. They could only have been leaked by the other one other person present.” 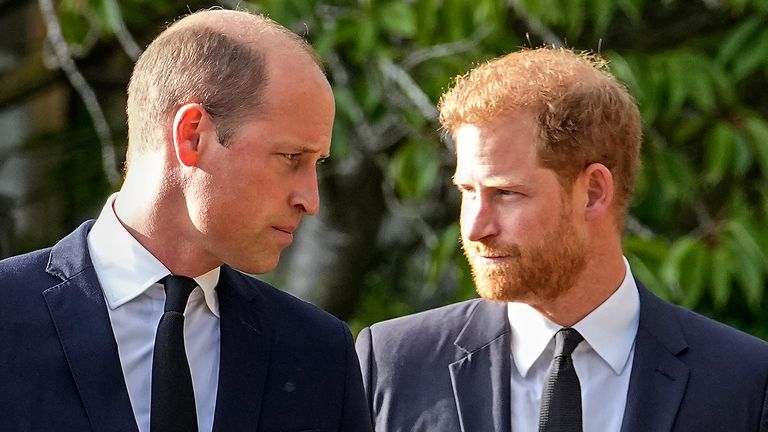 What we learned from Harry’s interview

Read more:
Harry cuts a sad, self-indulgent and naive figure in his memoir

In his ITV interview, Harry denied being “scathing towards any member of my family, especially not my stepmother”.

The duke said he wanted “reconciliation” with his family but “there needs to be some accountability”.

He told Bradby: “I think there’s probably a lot of people who, after watching the documentary and reading the book, will go: ‘How could you ever forgive your family for what they’ve done?’ People have already said that to me. 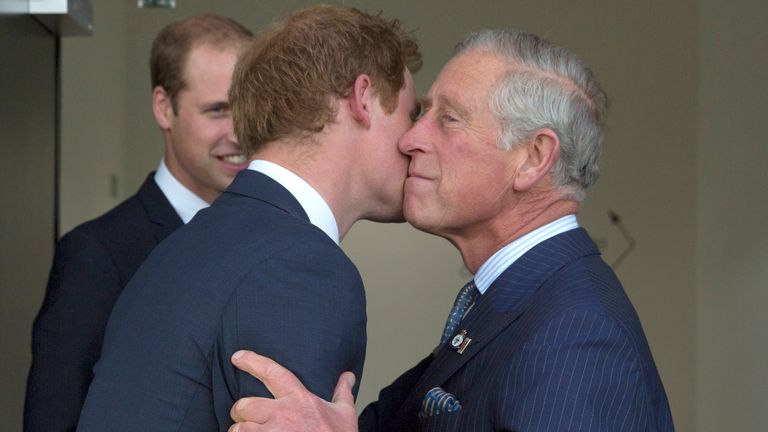 Prince Harry on row with Charles

Camilla was ‘the villain’

In his interview with 60 Minutes host Anderson Cooper on CBS, Harry said he once viewed Camilla as “the villain” and “dangerous”.

“She was the third person in their marriage. She needed to rehabilitate her image,” he told Cooper.

“The need for her to rehabilitate her image… that made her dangerous because of the connections that she was forging within the British press.”

He added: “And there was an open willingness on both sides to trade information and with a family built on hierarchy, and with her on the way to being Queen Consort, there was going to be people or bodies left in the street because of that.”

When asked about whether he and William urged Charles not to marry Camilla, he said: “We didn’t think it was necessary. We thought that it was going to cause more harm than good.”

Discussing Kate and William’s relationship with Meghan, Harry said the couple were “Suits fans” but there had been “a lot of stereotyping” over her being an “American actress, divorced, biracial”.

Bradby said the impression was that the Prince and Princess of Wales “almost from the get-go” did not “get on” with Meghan.

The prince said his brother “never tried to dissuade” him from marrying Meghan but he “aired some concerns very early” and claimed William told him: “This is going to be really hard for you”.

“Maybe he predicted what the British press’s reaction was going to be,” Harry added.

In his book, Harry claims he was physically attacked by William during a row over his marriage to Meghan.

He told ITV that he and his brother “used to fight all the time” as younger siblings but there was a different “level of frustration” in the alleged incident.

“I saw this red mist in him,” Harry said.

“I can pretty much guarantee today that if I wasn’t doing therapy sessions like I was, and being able to process that anger and frustration, that I would’ve fought back – 100%.”

Harry said he did not think his brother and father would read his book but added: “I really hope they do.”

Bradby suggested that Harry had “not so much burnt your bridges” with the Royal Family but “taken a flame-thrower to them”.

“Well they’ve shown absolutely no willingness to reconcile up until this point,” Harry replied.

“And I’m not sure how honesty is burning bridges. You know, silence only allows the abuser to abuse, right? So I don’t know how staying silent is ever going to make things better.” 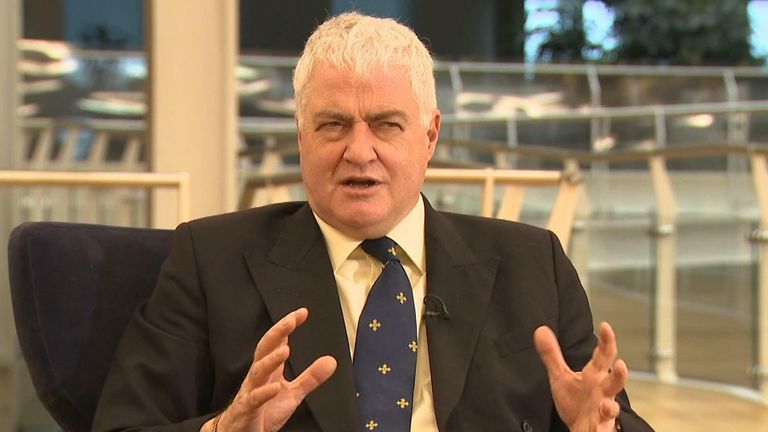 Harry ‘not texting’ William or speaking to King Charles

In his CBS interview, Harry said he is currently “not texting” William and that he has not spoken to his father for “quite a while”.

“Do you speak to William now, do you text?” Cooper asked him.

“Currently, no, but I look forward to us being able to find peace,” Harry replied.

Asked how long it had been since he had spoken to Charles, he said: “We haven’t spoken for quite a while, no, not recently.”

Harry said his “sibling rivalry” with William started when the pair were attending Eton College.

He recalled how his older brother told him to pretend “we don’t know each other” when they were at school together.

On his bid to take on the tabloids, Harry told ITV his father warned him it was “probably a suicide mission to try and change” the press.

The duke claimed there was a “distorted narrative” that he and Meghan “wanted to leave to go and make money” when they departed as working royals.

He said the couple decided to put their “mental health first” and asked for “help and support”.

“At that time, I didn’t fully understand how much – or how complicit the family were in that pain and suffering that was happening to my wife,” Harry added.

“The one group of people that could’ve helped or stopped this from happening were the very people that were – that were encouraging it to happen.”

Clarkson was widely criticised for his column, published in The Sun newspaper, which said he was “dreaming of the day when (Meghan) is made to parade naked through the streets of every town in Britain while crowds chant, ‘Shame!’ and throw lumps of excrement at her”.

Harry told ITV: “What he said was horrific and is hurtful and cruel towards my wife, but it also encourages other people around the UK and around the world, men particularly, to go and think that it’s acceptable to treat women that way.”

Harry said “the world” was asking for “some form of comment from the monarchy” but “the silence is deafening, to put it mildly”.

“Everything to do with my wife, after six years, they haven’t said a single thing,” he added. “But they’re willing to defend themselves regularly.” 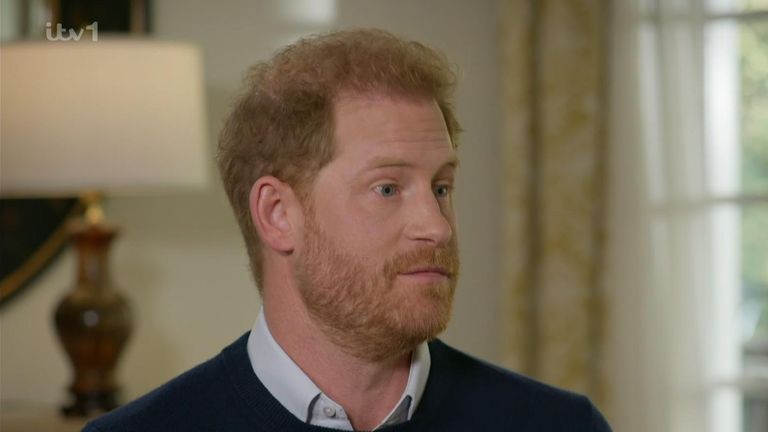 ‘I never accused family of racism’

Asked about his interview with Winfrey in June 2021, Harry said his wife’s claims that a family member made “troubling” comments about the skin colour of his son, Archie, related to “unconscious bias” not racism.

The duke also said the recent incident at Buckingham Palace involving black campaigner Ngozi Fulani and Lady Susan Hussey, the late Queen’s lady in waiting, “is a very good example of the environment within the institution”.

After Bradby suggested to Harry that “in the Oprah interview you accused members of your family of racism”, the duke responded by saying “no I didn’t” and added, “the British press said that”.

“Did Meghan ever mention that they’re racist?” Harry asked.

After Bradby said the duchess claimed troubling comments were made about Archie’s skin colour, Harry said: “There was – there was concern about his skin colour.”

Asked if he would describe that as racist, the duke said: “I wouldn’t, not having lived within that family.”

He continued: “The difference between racism and unconscious bias, the two things are different.” 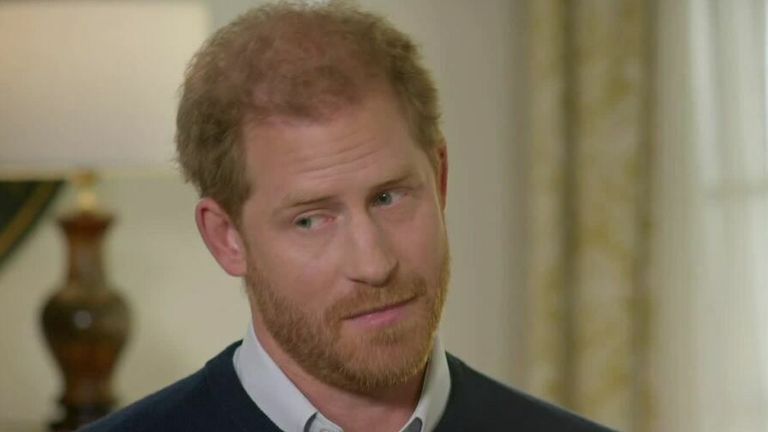 ‘Royals in bed with the devil’

Now living in California, Harry said he was “very happy” and “in a better place than I’ve ever been”.

“I think that probably angers some people, infuriates others, because just by the nature of me leaving,” he added.

Harry’s book is due to be released on Tuesday but Sky News obtained a copy after it was accidentally put out for sale early in Spain.

‘I was not given a realistic chance’, says Liz Truss, as she makes comeback
Tennis star Kyrgios avoids conviction after pleading guilty to assaulting ex-girlfriend
Elon Musk says Twitter is ‘trending to breakeven’ after near bankruptcy
China threatens ‘further actions’ over US downing of suspected spy balloon
Shark kills 16-year-old girl after she jumped from jet ski into water