A record 45,728 people crossed the English Channel to the UK on small boats in 2022, up more than 60% on the previous year as migrants continue to risk their lives making the dangerous journey.

The perils of the deep waters separating France and Britain were once again brought painfully into the spotlight over the last 12 months, when four people lost their lives after their boat capsized in freezing waters in December.

It was a year where the government continued to promise tough measures to stop the flow of boats and crack down on people smugglers, including pursuing its controversial Rwanda deportation scheme.

But data on the numbers of arrivals – compiled and analysed by Sky News – shows a different picture.

The figures, based on provisional data released daily and weekly by the government, show a sharp rise in the number of arrivals last year, a continuation of a years-long trend that shows no signs of stopping.

Figures released by the government on New Year’s Day were very similar, with the final number being confirmed as 45,756.

This sheds light once again on one of the most concerning trends – smugglers are packing more and more people aboard larger and larger dinghies, sometimes with deadly consequences.

In 2020, an average of 13 people were aboard each dinghy, Sky News analysis shows, rising to 28 the following year.

Last year that number rose again to 41, rising as high as 45 people per boat in the second half of the year.

Almost 44% of days saw at least one person make the life-threatening journey to the UK, with arrivals on 159 separate days. 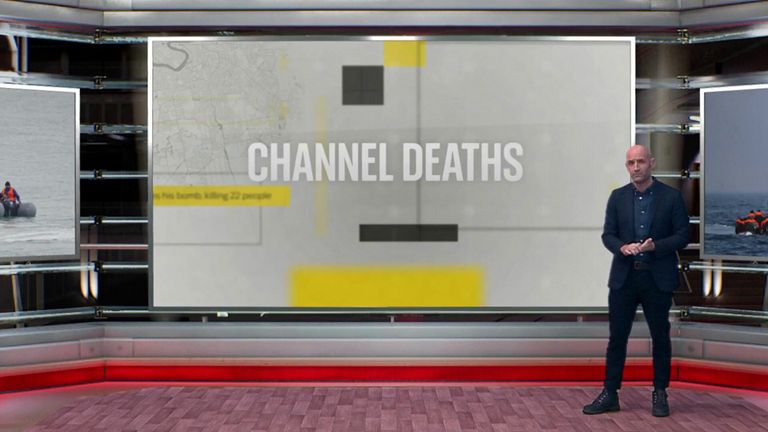 Why do people cross the Channel?

Read more:
People waiting to cross the Channel say they have ‘no choice’
‘The cruel Channel killed them’

A decline in the use of ferries by people seeking to reach Britain – exacerbated by the pandemic – has seen the number of people using dinghies spike in recent years.

Numbers of overall asylum applications, however, have modestly increased over the past few years – suggesting that it is the method of reaching the UK that has shifted more than the numbers of people.

A government spokeswoman said: “The global migration crisis is causing an unprecedented strain on our asylum system.

“Nobody should put their lives at risk by taking dangerous and illegal journeys. We will go further to tackle the gangs driving this, using every tool at our disposal to deter illegal migration and disrupt the business model of people smugglers.”

Despite the increasing numbers, the UK’s small boat arrivals continue to be much lower than the number of people arriving in Europe.

At least 154,290 people arrived in Europe via the Mediterranean by land and sea in 2022, according to data from the United Nations High Commissioner for Refugees (UNHCR).

At least 1,939 people are estimated to be dead or missing, according to the same data.

Steve Valdez-Symonds, Amnesty International UK’s refugee and migrant rights director, said: “Just like last year, 2022 is coming to a close after yet more deeply tragic and largely avoidable deaths in the Channel.

“Shamefully, even this latest disaster hasn’t shaken the Government out of its cruel and punitive asylum policies, including the scapegoating of people arriving by small boats.

“The Home Office’s own data speaks volumes: most people arriving in the UK are from countries like Iran, Afghanistan, Syria and Eritrea where torture, terror and brutal repression are rife.”

He called for “fundamental political change” and safe routes to asylum in the UK for people fleeing persecution, as well as an “end to mass detention”.

A government spokesperson said: “The global migration crisis is causing an unprecedented strain on our asylum system.

“Nobody should put their lives at risk by taking dangerous and illegal journeys.

“We will go further to tackle the gangs driving this, using every tool at our disposal to deter illegal migration and disrupt the business model of people smugglers.”

Tennis star Kyrgios avoids conviction after pleading guilty to assaulting ex-girlfriend
‘Coming very soon!’: Jeremy Renner shares image of new show which will be out ‘as soon as I’m back on my feet’
Some of Wall Street’s biggest names are exposed to the Adani Enterprises plunge
Lectric XP Trike launches for pre-order as low cost, folding electric trike
Elon Musk cleared of deceiving investors with Tesla tweet