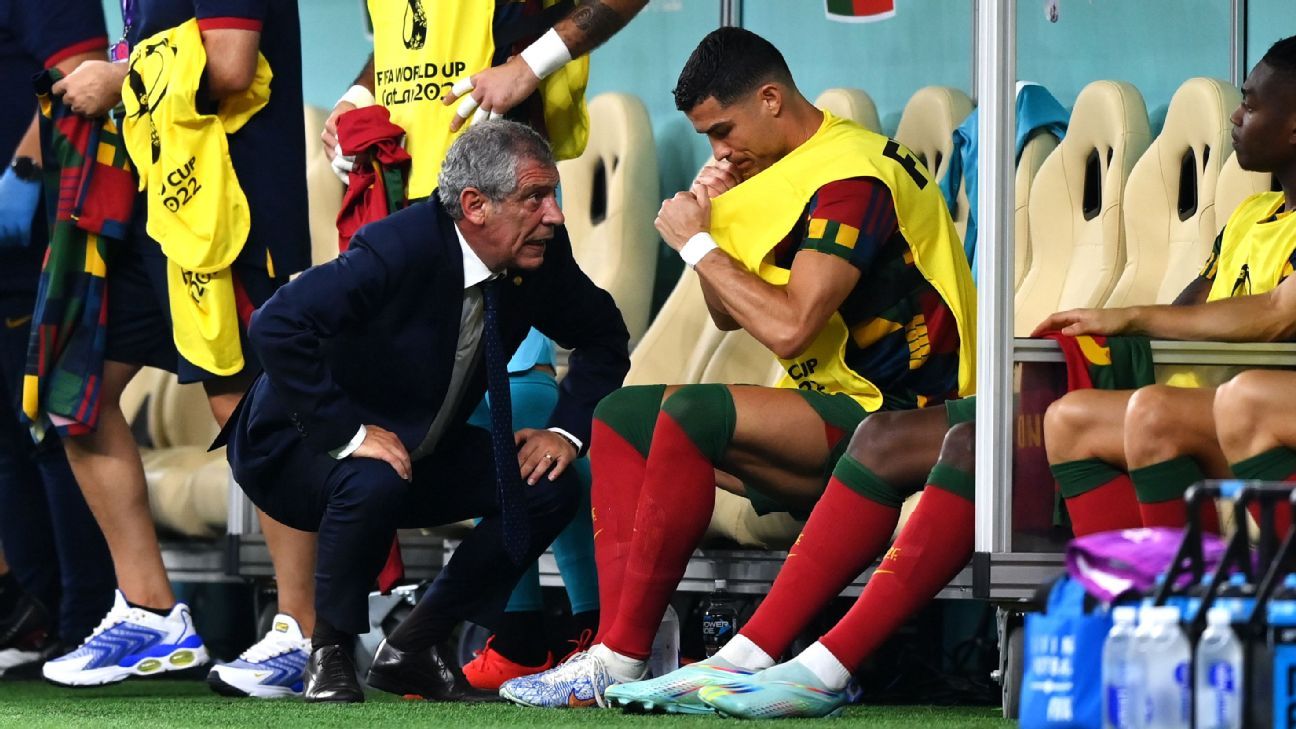 We all know how that turned out — Ronaldo’s Old Trafford contract ripped up last month in an acrimonious exit — but Portugal showed on Tuesday night that a similar implosion is not inevitable for their captain in Qatar.

Santos felt compelled to remind the 37-year-old that he is part of a team, no longer untouchable and immune from the disciplinary conventions that bind mere mortals. The petulance Ronaldo showed in reacting negatively to his substitution against South Korea was a reminder of the behaviour that led to his departure from United; his devoted supporters viewing any diminishing status as disrespect, his critics fueled by evidence Ronaldo is incapable of controlling his rage at the inexorable dying of the light.

Ronaldo’s awesome powers may be on the wane but make no mistake, leaving him on the bench against Switzerland was a massive call. This was the first time he did not start a game for Portugal at a major tournament since 2008, ending a 31-game streak. And so what followed was nothing short of remarkable: Ronaldo’s replacement, Goncalo Ramos, defied having just 33 minutes of international football to his name to net a hat-trick in a 6-1 thrashing of Switzerland in which Portugal looked far more fluid and dynamic than at any previous stage here in Qatar.

This was a collective performance to rival any produced at these finals, propelling Portugal alongside England as the tournament’s joint top-scorers on 12 goals. The mixture of fluidity and flair in evidence will serve as a warning to all seven teams left — and should also evoke familiar feelings in Ronaldo, watching on for all but the last 17 minutes.

United became a more potent and unpredictable attacking unit without Ronaldo. How can anyone argue differently about Portugal here? Ramos became the youngest man to score a hat-trick in a World Cup knockout match after Pele.

Switzerland, who had conceded just twice in three matches to this point, were completely overwhelmed. Bruno Fernandes had one of those evenings where his instincts were sharp, playing passes with precision as opposed to the scattergun distribution he often produces for United. Joao Felix was a constant menace. As Portugal sat 4-1 up on the hour mark, Santos came under pressure from a crowd desperate to see their idol, regardless of the cohesion they witnessed in his absence.

It was a feeling that built before kick-off, with as many cameras trained on the Portugal dugout as there were on the teams belting out their national anthems inside the Lusail Stadium. Santos ended up shooing away the assembled throng as they threatened to break the rope cordoning them off from Ronaldo and his fellow substitutes. He desperately wanted the attention shifted elsewhere. And from the moment Ramos smashed a sumptuous 17th-minute shot inside Switzerland goalkeeper Yann Sommer‘s near post from a tight angle, Santos’s judgment looked vindicated.

Alex Kirkland reacts to Portugal’s 6-1 win over Switzerland in the last 16 of the World Cup.

Pepe added a second, Ramos a third, Raphael Guerreiro a fourth. Yet the Ronaldo subplot persisted. He was lauded as he ran out to loosen up at the start of the second half. The crowd openly called for him with the game over as a contest.

The cheer that rang out as he stepped out in the 73rd minute, uncaged, to enter the field was as loud as any goal celebration, many of which he joined in with as the substitutes ran along the touchline in jubilation. Ramos had netted his hat-trick by that point but Ronaldo’s name was the one being sung.

He received the captain’s armband from Pepe and ran on in search of the goal that would add the personal coda he no doubt wanted to the ensemble piece that went before him. After having 84th-minute strike disallowed for offside, it was in fact another substitute who found the net, AC Milan‘s Rafael Leao curling in a fine effort in stoppage-time.

Few people are talking about them, but Portugal are live contenders for this World Cup now. They will start favourites against surprise-package Morocco in the quarterfinals, with or without Ronaldo, who must now accept this change in status.

“That is still something which has to be defined,” said Santos after the match on Ronaldo’s ongoing role in the team. “I have a very close relationship with him, I always have. I’ve known him since he was 19 at Sporting CP [in Lisbon] and then he started to develop in the national squad when I arrived in 2014. Ronaldo and I never misinterpret the human and personal aspect with that of manager and player.

“I will always consider that he is a very important player to have in the team.”

Santos added: “This is something that is finished and solved, it is also important to look at the example of this player’s history, he is one of the best players in the world and therefore all we have to do is come [together] collectively.”

Ronaldo could still win a World Cup, something he only half-jokingly seemed to indicate in his interview with Piers Morgan would trigger his immediate retirement. He does not have to be the star for Portugal to shine bright. Santos, like Ten Hag, can point to clear evidence his team are better without him in the line-up. It stands to reason that a player with serious claims to be the greatest of all time could be a truly devastating impact substitute.

But he has to embrace this new reality, something he never managed under Ten Hag. He arguably didn’t even try. The proximity of the prize in Qatar should sharpen his focus. Perhaps his treatment at United will help him. And in that context, this was actually a step forward: At least he didn’t refuse to come on.