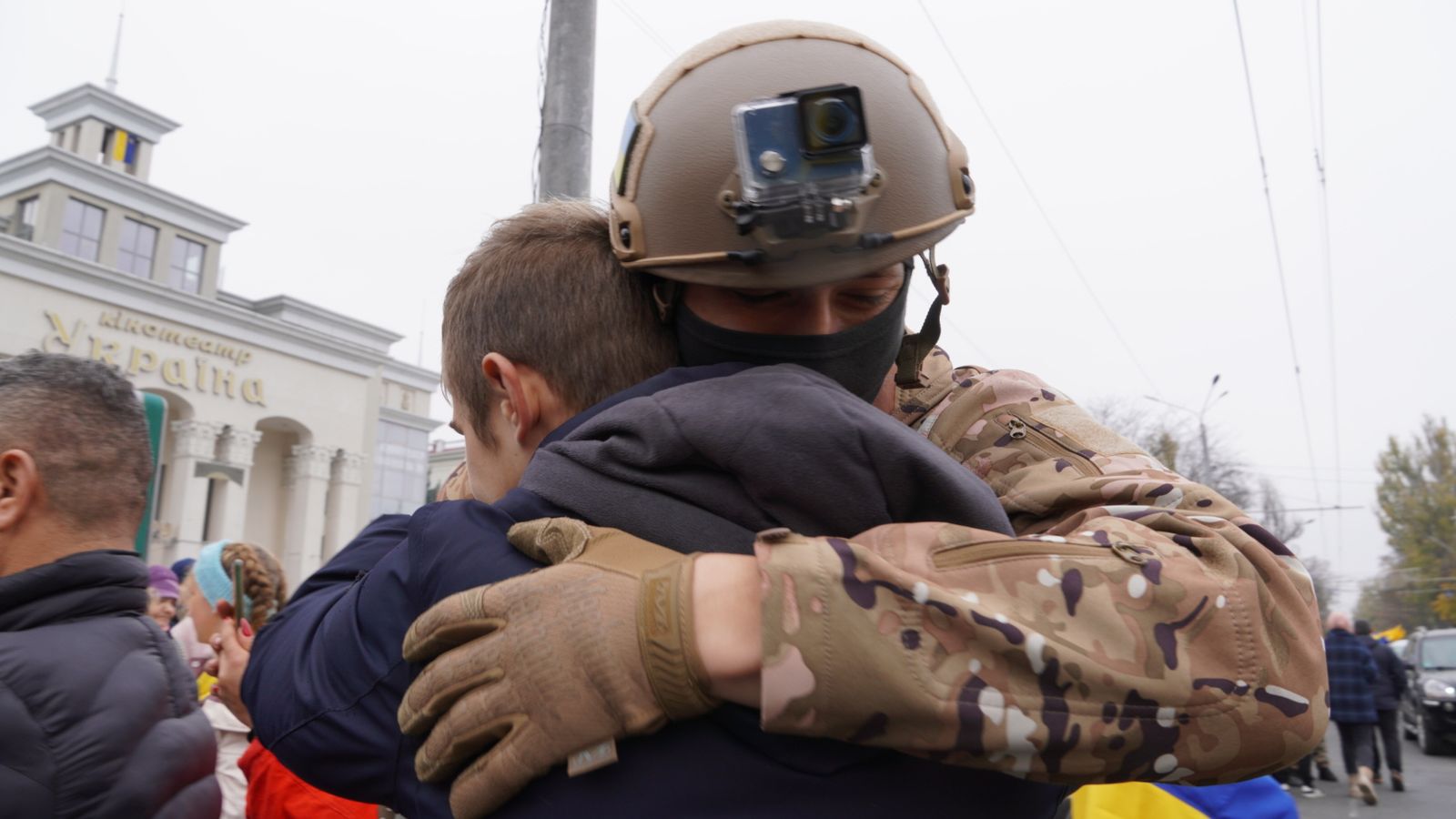 With the magnitude of the moment still sinking in, a girl in a red coat ignores several cars and runs through traffic to throw her arms around a Ukrainian soldier.

It is a scene of celebration that is being repeated across Kherson, now liberated from Russian control.

Everyone in a uniform is being given a hero’s welcome – liberation clearly feels good and they are holding on to it tight.

This plays out as Ukraine‘s national anthem banned under Russian occupation blares across the central square.

A woman, who tells me her name is Babushka Alla, is overjoyed – and wants to thank the armed forces.

“We are so happy that our strong men returned to us and liberated us from the occupiers!”

The people here have lived under nine months of terrifying occupation.

With this in mind, it is easy to understand why they are weeping tears of relief and joy and clinging to their liberators.

I meet Natalia, who’s holding back the tears.

The celebrations are infectious. People dance and throw their arms in the air.

Everyone waves a flag and some even surf around the city on the top of cars shouting, “Glory to Ukraine, Glory to the heroes”.

Many here feared this time would never come.

And now they are cherishing it. It’s a rare moment of good news in a war that has caused so much pain.

And it is perhaps a reflection of the strength of the residents who carried on as a kind of normal.

Some shops are open and there are some cars on the street. But the smashed-up buildings and the dark secrets they contain are hard to forget.

Members of Russia’s internal security the FSB were based in a hotel in the centre of the city before it was hit by a Ukrainian artillery strike.

From there they enforced Moscow’s rule of oppression.

Olga, who arrived outside the building, is demanding justice. She says many people in the city simply disappeared.

Surviving under occupation was a life lived in fear. And although freedom is a powerful currency, basic services remain cut.

There’s no power and there are queues everywhere for water. People waiting patiently in line holding empty plastic bottles.

The Russians spent their time here talking of a new motherland. The posters for the sham referendum still hang heavy over the city.

But Vladimir Putin’s illegal annexation and his claim Kherson is Russia’s forever means nothing when the people here have a different idea of who they want to be.

And that is obvious as most of the city’s population are draped in a Ukrainian flag, or are holding one.

The truth is Moscow’s forces built nothing and they destroyed much. The TV tower is a twisted skeleton of scorched metal.

The Russians blew it up as they left, cutting the telephone and the internet, a goodbye gift from a humiliated and defeated army.

The Russians may have retreated but they haven’t gone far.

They’re now just 2km away on the eastern bank of the Dnipro River – smoke billows on the horizon as explosions are heard in the distance.

It’s a sobering reminder that this war is far from over.

For now though for the people it’s all about reconnecting with the outside world.

Back in the central square soldiers have set up satellite internet so people can tell their loved ones they are OK.

Staring at their phones everyone tries to catch enough signal to get a message out. But amid this jubilation and relief, there are moments of reflection.

In fluent English, Andrii describes to me what the last nine months have been like.

“Feels like freedom at last. Feels like victory is coming here. From the very first day, I knew it was coming. You have to have something which you live for and this was the moment to live for. Great day. Liberation is not something happening every year. It’s something once in every five generations. It’s a moment to stay.”

There’s anger here too at what Russia has done to Ukraine.

As we leave the centre of the city we see a group of young people tearing down posters put up by the Russian invaders.

And with the Kremlin’s forces in retreat here they start to chant loudly, willing their military to free the rest of the country.

English cricket bowled over with £400m private equity bid for The Hundred
Inflation-busting pay rises for public sector workers ‘unaffordable’, says minister
‘I have no other option’: Migrants fill up squalid camp and wait for boats to reach English shores
‘We have it in writing from FIFA’: Rainbow hats and flags allowed at Wales’ World Cup game against Iran
Mugshot of Colorado gay club shooting suspect released after first court appearance