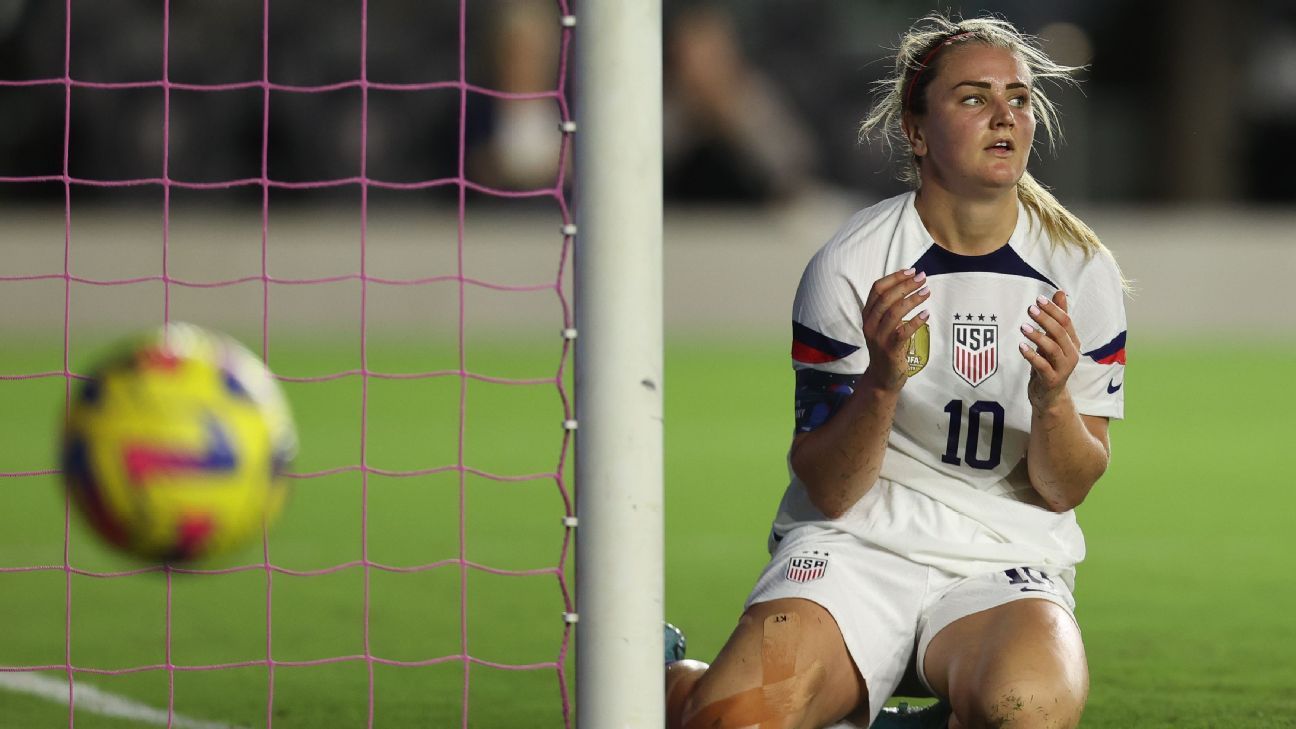 The United States women’s national team lost 2-1 to Germany on Thursday night for their first three-game skid since 1993 and first home defeat in more than five years.

Paula Krumbiegel scored the decisive goal in the 89th minute for third-ranked Germany in the exhibition at DRV PNK Stadium in Fort Lauderdale, Florida. Megan Rapinoe scored in the 85th minute for the top-ranked Americans, who had been unbeaten in 71 straight games at U.S. soil.

It also marked the third straight loss for Vlatko Andonovski’s side against European sides. The U.S. lost at England and Spain last month.

Lindsey Horan nearly gave the U.S. an initial lead in the second half when she tried a bicycle kick that went off the post. On the counter, U.S. goalkeeper Casey Murphy made a dramatic save, but Klara Buhl had the rebound, which hit the post and bounced off Murphy for an own goal in the 52th minute.

Rapinoe’s late goal seemed to be enough for a draw, but Jule Brand‘s cutback for Krumbiegel on a counter in the final moments was enough to settle the match.

Coming into the match with more than a few wobbles, not least against European teams, the United States saw their unbeaten home stretch (71 matches) come to an end thanks to Euro 2022 runners-up Germany, but it wasn’t for a want of trying.

Yes, there were questions around tight offside calls that went against the U.S. in the first half, but the team did manage to carve out goal-scoring opportunities on both sides of the break. Had it not been for better finishing or at least better understanding between the attackers, the hosts may well have been up before the Casey Murphy‘s own goal.

After conceding, the USWNT rather sunk into themselves and looked lost until they pulled back an unlikely late equaliser from Megan Rapinoe (that was ultimately wiped out by Germany’s late winner) from a moment of good pressing by Alex Morgan, something that was missing from their second-half play.

On another day, it’s easy to image the U.S. winning when presented with the same opportunities as Thursday night. Yet the lesson here is to take those chances when they’re presented, not just against other teams in the top five — Germany are currently ranked third in the world — but with nations around the world improving all the time.

2. Defensive issues need to be addressed

For two teams who are used to attacking to their heart’s content, it’s clear neither side wanted to spend large portions of the match defending. But part of being able to challenge for silverware is having strength across the pitch. Both defences looked less than comfortable when the ball was sent into a “Corridor of Uncertainty,” rather converting the six-yard box into a “Zone of Panic.”

For an experimental Germany team, it’s not overly surprising that they might look vulnerable at the back when overloaded by the USWNT. Yet, the U.S. should also be concerned. While attempting to firm up their back line during the first 15 minutes, the Germans were able to get the ball over the top.

For the rest of the first half, the U.S. negated this by not allowing Germany to progress the ball into dangerous positions. But as soon as the Germans began to find a speedy transitional game after the break, the U.S. again began to look fragile at the back and as short on ideas when overloaded in the box.

3. Is Vlatko any closer to USWNT’s World Cup lineup?

One of the great clichés in football is often trotted out when it comes to coaches being given headaches by their players, more specifically, by having just too many options. For any USWNT coach, this is a persistent headache to be endured but with time running out until the start of the 2023 World Cup, Vlatko Andonovski needs to have a picture of how the 23-player roster needs to take shape.

After a strong performance in the loss to England last month, Sophia Smith looked to have locked down her place but a sub-standard performance against Germany has maybe forced Andonovski to reevaluate and write her name in pencil rather than permanent marker. Conversely, another attacker coming into the match off the back off a strong NWSL season, Mallory Pugh may have tipped the scales in her favour with her endeavours although her finishing left something to be desired.

The wider problem for the coach might not be the individuals chosen but the group he picks to start, the balance off with Morgan, Pugh and Smith on the pitch together but with questions over his favoured formation still lingering, the jigsaw is a long way from looking like more than a collection of shapes.

The German super-sub was involved in both goals and gave the visitors much needed bite.

It was a night for the entire USWNT defence to forget but the centre-back repeatedly found herself exposed.

After Morgan and Rapinoe linked up for an equalizing goal, it was Krumbiegel who answered right back to net the winner.

Germany is back on top 2-1 🇩🇪 pic.twitter.com/1Lx4lxoKuw

Germany’s first goal was a production in two parts. This would have been a goal-of-the-year candidate from Horan if not for that post…

… but alas, the scramble would let the Germans play the counterattack with Buhl getting a fortunate bounce for the goal.

Germany takes the 1-0 lead over the USWNT in Florida 🇩🇪 pic.twitter.com/yzngnbTM5k

Ruled as an own goal for Murphy but credit to Buhl for getting the shot on frame.

After the match: What the players and managers said

Germany coach Martina Voss-Tecklenburg on the win: “We changed tactics at halftime and the U.S. had really strong standards. Then we had a quick change when we scored unexpectedly and after that we did really well. [The U.S.] got the goal against us in the last couple minutes and then we had to score. Did really well and scored the last two minutes.”

– The three-game losing streak is the USWNT’s first such skid since 1993.

– Casey Murphy’s own goal was the first that the USWNT had conceded since a 4-1 win over Brazil in 2018.

Both sides meet again on Sunday (watch on ESPN, 5 p.m. ET) at Red Bull Arena in New Jersey for both sides’ final match of the year. Attention then turns to gearing up the 2023 Women’s World Cup next summer, where these two teams will be among the favorites.

The United States head to New Zealand in January for training camp and a pair of exhibition games against the Kiwis on Jan. 18 and Jan. 21, both in stadiums where the Americans will play during the group stage of the World Cup.