Christmas turkey supplies could be at risk if the worst avian flu outbreak in UK history continues to spread, the National Farmers’ Union has warned.

More than three million birds have had to be culled so far, with Avian Influenza Prevention Zones introduced in Norfolk, Suffolk, parts of Essex and the whole of the South West of England.

Bird flu has been detected at 155 sites across the UK.

While wild bird populations have been severely affected, poultry farmers are growing increasingly concerned about their livestock – and whether Christmas turkey supplies could be impacted.

“It is a risk,” James Mottershead, chairman of the NFU Poultry Board, told Sky News.

“I do know of some instances where seasonal turkey producers have been affected by this, so far, this year. If you have an outbreak on your farm and your farm is classed as an infected premises, it is serious – you could be out of production up for up to 12 months.”

On 27 September, the Department for Environment, Food and Rural Affairs (DEFRA) extended its Avian Influenza Prevention Zones following a number of detections.

It is now a legal requirement for bird keepers in Norfolk, Suffolk and parts of Essex to follow strict biosecurity measures – with keepers of more than 500 birds now required to restrict access for non-essential people on site.

In Devon, poultry farmer James Coleman, who runs Creedy Carver farm, has had to cull 20,000 ducks.

He has not had a case of avian flu but took the decision as a preventative measure to protect his chicken and duck processing plant on the same site – which processes birds for other farmers.

“I wouldn’t say we’re clinging on – but it’s had a huge effect,” he told Sky News.

“At the moment everybody in the industry is just on tenterhooks constantly. As soon as you get a new batch of birds on our other site, you’re permanently worried. Every day you go and look at them and if a duck sneezes in a slightly different fashion, you’re instantly thinking ‘hang on a minute – is something wrong?'”

Farmers currently only receive compensation for healthy birds that are culled, but not those that die of the disease, or consequential losses.

He said there needs to be a “massive review” on how DEFRA deals with the outbreak, and called for further financial aid.

“If we’re going to have a situation where the government is going to continue shutting down businesses and shutting down farms, we need financial support.

“The rest of the country had it through COVID – we need that same level of support.

“If we are being forced to close through government policy, we have to have that same financial support that everybody else had so that when we’ve done the clearout and when we reopen again, we still have a business to come to.” 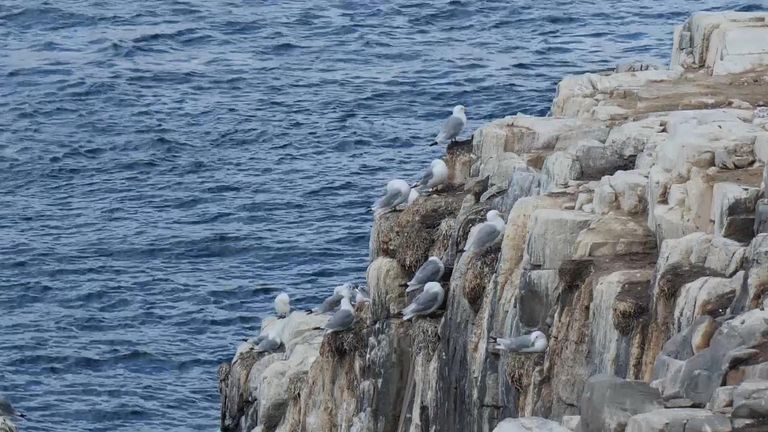 For months, thousands of dead birds have been washing up on beaches across the UK.

Paul St Pierre, conservation officers at the Royal Society for the Protection of Birds, told Sky News the impact has already been “massive”.

He said: “We’ve seen declines of between 50% and 80% of the population of Great Skua in the UK and we hold two-thirds of the world population, so that species has gone straight onto the red list.

“These birds are long-lived – you’re talking about birds that don’t even start breeding for five years and then they only have one chick per year, so it might take decades before some of these populations recover,” he added.

In a statement, DEFRA told Sky News: “The UK is currently experiencing the largest-ever outbreak of avian influenza. To date, 3.1 million birds have unfortunately been culled. This represents a small proportion of overall poultry production, around one billion birds a year.

“DEFRA’s objective in tackling any outbreak of avian influenza is to eradicate the disease as quickly as possible from the UK poultry and captive-bird population and regain UK World Organisation for Animal Health (WOAH) disease-free status.”