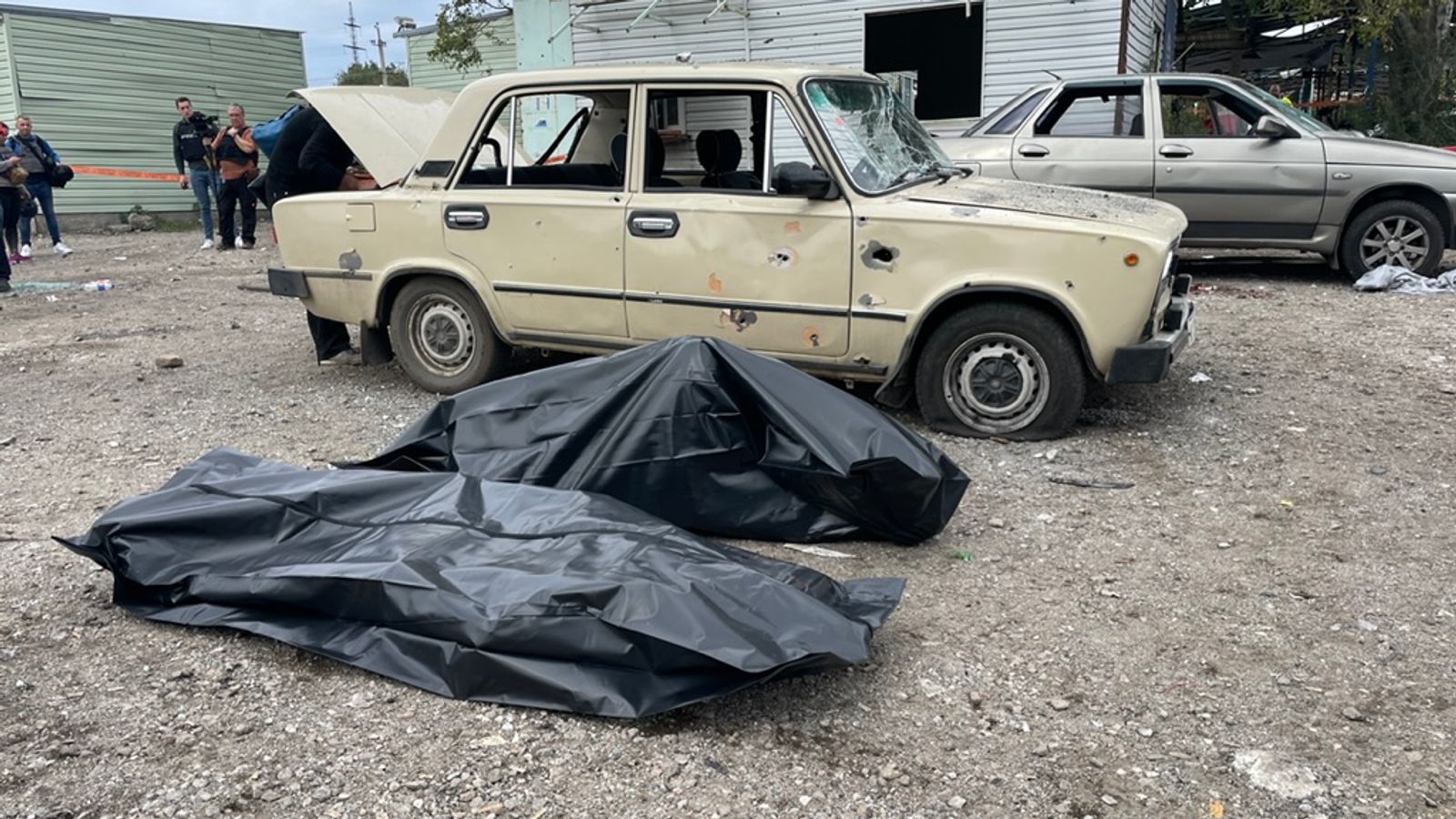 There was an awful near silence as the war crime investigators went about their business and the bodies of the victims were methodically packed into body bags.

We counted at least 15 body bags being loaded one on top of each other into a succession of ambulances. The death toll is higher and includes several children, one a baby just a few months old.

The attack was so swift and so deadly, when we arrived at the scene, many of the victims were still where they had died.

An elderly man’s hand was still clasping his steering wheel, frozen in time, his body slumped sideways onto the passenger seat.

Two young women were laying on the ground outside their vehicle, their legs at grotesque angles and flies massing round open wounds in their faces.

Perhaps they’d been chatting to each other when the missiles hit. A group were all in their seats in the van they were travelling in.

Someone had covered their bodies with thin white sheeting but you could still make out the front passenger, his mouth open, head back as he’d been killed.

The vehicles were packed with suitcases and medical packs the group were taking only a few miles down the road to help relatives, the elderly and the ill inside Russian-controlled territory.

According to Vladimir Putin, all this area is now Russian after he signed a decree annexing not only Zaporizhzhia but also Kherson and the two Donbas regions, Luhansk and Donetsk.

But in this clearing which was once the site for a car parts market, the Ukrainians who were gathering the DNA of their countrymen and women were digging in once again for a fight to hold on to their territory, but also a legal war which they’re determined to win.

“These are definitely war crimes,” the Ukrainian interior minister Denys Monastyrskyi told us after visiting the site.

“And Putin should pay for what he’s done.”

The aid convoy was a routine convoy. Up to 150 people met here daily first thing in the morning having got permission from the Russian authorities to visit the areas under Russian control.

They were planning to take out elderly or ill relatives who wanted to flee as well as deliver some provisions for those who didn’t want to leave their homes. They had no reason to suspect they would be the target of any attacks.

One witness, who asked only to be called Valeriy, said he couldn’t understand the questions about who had carried out this atrocity.

“I’m in shock from the rhetoric of journalists from Germany, from France, who ask who did this,” he told us.

We spot Olga Linik on her telephone.

She’s obviously anxious and tells us she’s trying to find her parents. Her mother and father are both doctors and were in the convoy.

“I tried to persuade them to stay with me in Dnipro but they insisted they wanted to go and help people in the Russian areas,” she explains.

She breaks off to receive a call. It’s her father who comes out from amidst all the busted vehicles in the convoy and flings his arms around her, sobbing.

Her mother hasn’t made it.

The two walk off back into the bomb site where Olga and her father say their final goodbyes, arms around each other, their mother’s black body bag at their feet.

At the time of writing, according to the Ukrainian police 30 people in the convoy have died, including children, and 88 more have been injured, a number of them critically wounded, in a string of attacks on Zaporizhzhia throughout the day.

Many Ukrainians we spoke to attributed the spike in attacks to Russian losses on the battlefield.

But the attack on the civilian convoy also came hours before the Russian President publicly declared his country’s annexation of the four Ukrainian regions.

But the devastating civilian attacks only seem to have hardened the resolve of the Ukrainians and their leader with Volodymyr Zelenskyy slapping in his application for Ukraine to become a member of NATO.

It’s a threat which was said to have prompted his Russian counterpart to mount his “special operation” in the first place. The situation on the ground in Ukraine looks set to become a lot worse.