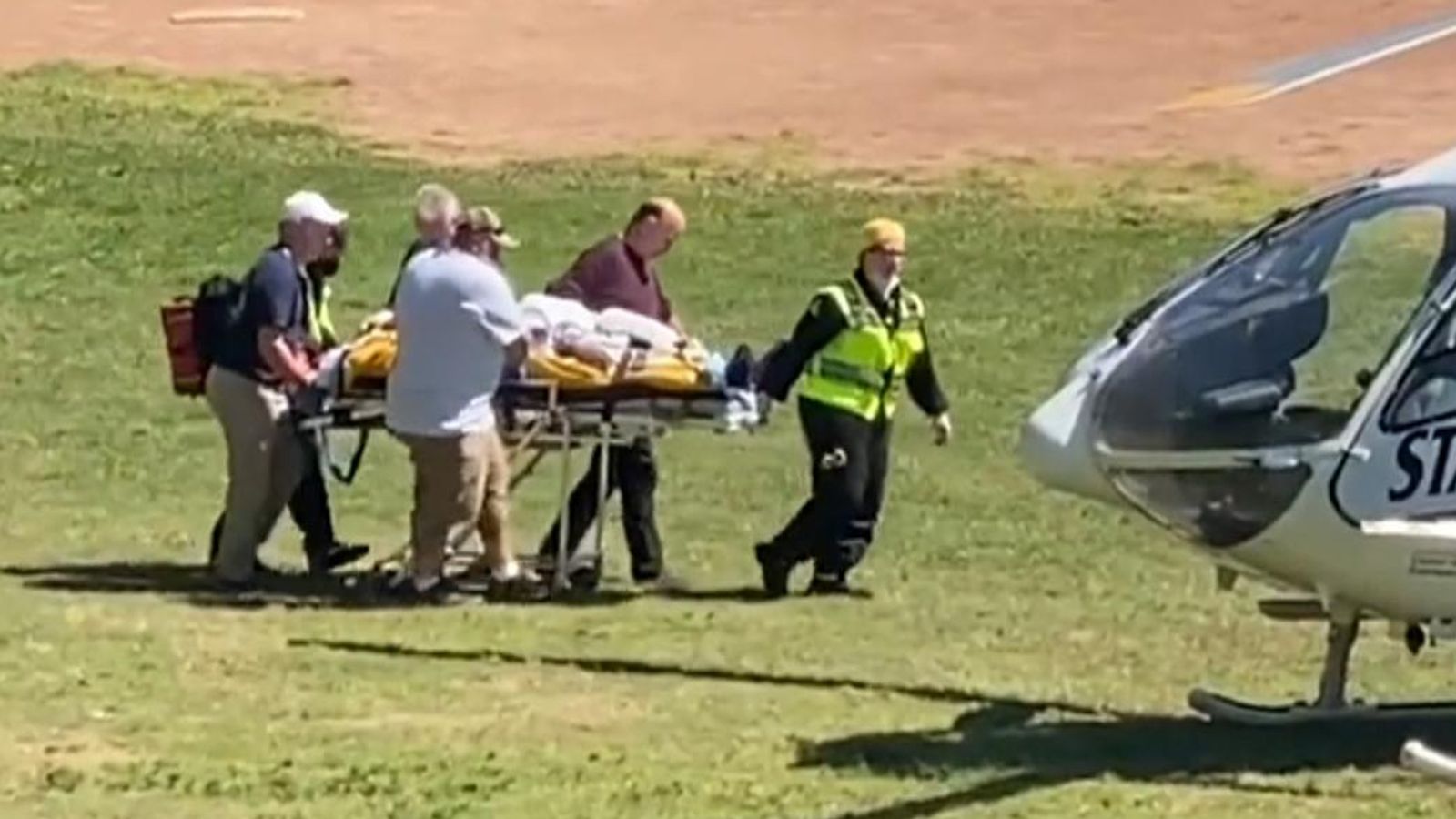 Author Sir Salman Rushdie, who has faced death threats for his novel The Satanic Verses, has been stabbed “up to 15 times”, including in the neck, while on stage at an event in New York state.

The Indian-born British author has been airlifted to hospital but his condition is not yet known. His agent said he is undergoing surgery.

The 75-year-old was about to give a lecture when a man stormed the stage at the Chautauqua Institution and began attacking Sir Salman as he was being introduced, according to witnesses.

The novelist, who became an American citizen in 2016, fell to the floor after the suspect reportedly punched or stabbed him 10 to 15 times. He was restrained and then arrested, and is now in custody.

Police said the interviewer at the event suffered a minor head injury after also being attacked.

Read more: Why is Salman Rushdie so controversial?

Witness Julia Mineeva Braun told Sky News that as Sir Salman was being introduced “all of a sudden from the left-hand side of the stage a short man, (dressed) all in black, ran out and he approached Mr Rushdie”.

“It was very quick… we thought he was fixing his microphone and then we saw the knife. He starting stabbing him in the neck first… and Mr Rushdie got up and started running. After that, people in the audience got up on stage and pinned the attacker down. It’s hard to believe. We’re still in shock.”

New York governor Kathy Hochul said a state police officer saved the author’s life and that of the moderator, who she said was also hurt.

Ms Hochul added: “He is alive, he has been airlifted to safety. But here is an individual who has spent decades speaking truth to power, someone who’s been out there unafraid, despite the threats that have followed him his entire adult life.”

A video posted online showed a number of people rushing on stage in the aftermath as Sir Salman was tended to.

A picture circulating on social media appeared to show Sir Salman with his legs slightly raised and someone applying pressure to his abdomen.

On stage there were two yellow chairs, a table and rug. Dozens of audience members were present during the incident.

In another video on Twitter, taken a number of rows back from the stage, a woman could be heard saying: “Hopefully they can save him because the first knife was right near his artery.”

Jeremy Genovese, 68, from Beachwood, Ohio, said he arrived at the amphitheatre as it was being evacuated and that people were “streaming out”.

He said: “People were in shock, many people in tears.”

Sir Salman, who lives in New York City, was due to speak to Henry Reese, from the City of Asylum organisation, a residency programme for writers living in exile under threat of persecution.

They were expected to discuss America’s role as an asylum for writers and other artists in exile and as a home for freedom of creative expression.

State police said in a statement they are “investigating an attack on author Salman Rushdie prior to a speaking event at the Chautauqua Institution in Chautauqua, NY”.

“At about 11am, a male suspect ran up onto the stage and attacked Rushdie and an interviewer. Rushdie suffered an apparent stab wound to the neck, and was transported by helicopter to an area hospital.”

They added: “The interviewer suffered a minor head injury. A State Trooper assigned to the event immediately took the suspect into custody. The Chautauqua County Sheriff’s Office assisted at the scene.”

The police statement gave no motive for the attack.

The Chautauqua Institution said it is “currently coordinating with law enforcement and emergency officials on a public response following today’s attack of Salman Rushdie on the Chautauqua Amphitheater stage. We will provide more details as we know them”.

His fourth book, The Satanic Verses, was banned in 1988 in a number countries with large Muslim populations, including Iran, after it was considered by some to contain blasphemous passages.

The Middle East country also offered a bounty of more than $3m for anyone who kills the writer.

In 1998, Iran’s pro-reform government of President Mohammad Khatami distanced itself from the fatwa, saying the threat against Rushdie was over after he had lived in hiding for nine years.

The book’s Japanese translator was stabbed to death in 1991 and other people involved in publishing it were attacked.

But Ayatollah Khomeini’s successor as Supreme Leader, Ayatollah Ali Khamenei, said in 2005 that the fatwa was still valid and three hardline clerics called on followers to kill Rushdie.

Rushdie continued to write despite threat to life

Salman Rushdie is an Indian-born British author whose writing about religion and politics has made him controversial in some parts of the world.

Some of the scenes in the 1988 book depict a character modelled on the Prophet Muhammad and this was met with anger from some members of the Muslim community in the UK.

Protests spread to Pakistan in January 1989 and the following month, the spiritual leader of revolutionary Iran, Ayatollah Ruhollah Khomeini, condemned the book and issued a fatwa against him.

A bounty was offered for his death. Rushdie went into hiding under the protection of Scotland Yard in the UK, although he appeared in public occasionally.

Despite the threat to his life, he continued to write and in 1998 the Iranian government said it would no longer enforce the fatwa. But Ayatollah Khomeini’s successor as Supreme Leader, Ayatollah Ali Khamenei, said in 2005 that the fatwa was still valid.

Rushdie wrote about his experience in the third-person memoir Joseph Anton in 2012. He was knighted in 2007, a move that was criticised by the Iranian and Pakistani governments.

Nick Saban might not like the transfer portal rules, but he’s mastered them
How to get the most out of Apple’s new AirPods Pro 2
As 125 die in stadium violence, ex-Indonesia manager says fans’ passion can have devastating results
Intel’s self-driving car division Mobileye files for IPO
Tesla unveils new Dojo supercomputer so powerful it tripped the power grid