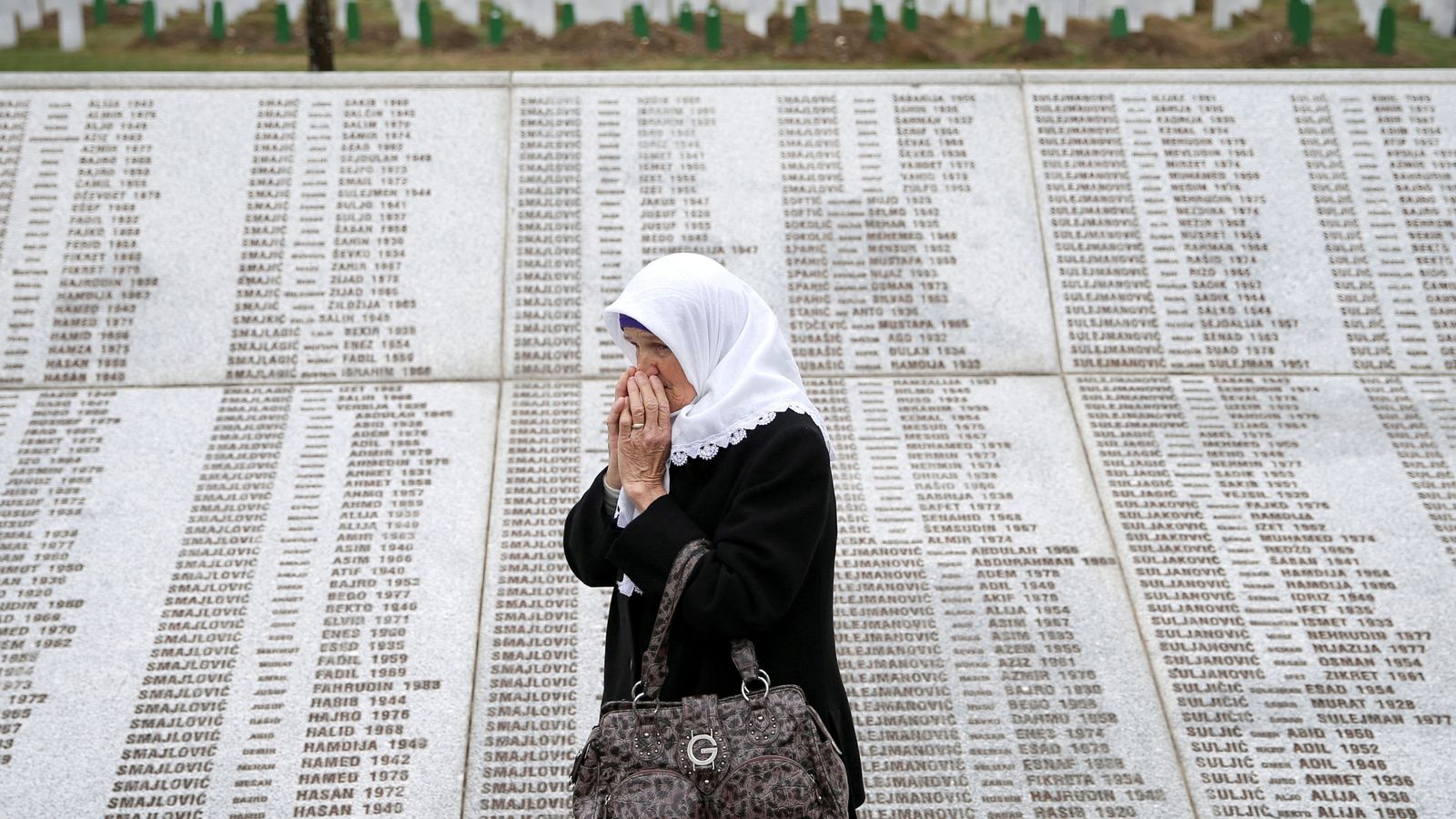 In the Balkans, Europe is watching as a crisis slowly develops.

A familiar problem, in a familiar place, but now with the added prospect of Russian intervention.

Thirty years after its horrific war, Bosnia is caught in a complex, volatile dispute that embraces ethnic divisions, religious rivalry, genocide denial, harrowing memories and the nagging suspicion that Moscow is stirring things up.

The past pushes in on you in Bosnia. It’s a country shaped by centuries of ethnic and religious division, and which still struggles to cope with its own fractured identity.

But it is the modern history that is so tangible – the various scars left behind by three-and-a-half years of brutal warfare in the 1990s. There were 100,000 deaths in a country of just four million people.

Some of these scars are startlingly obvious. We stop at a block of flats in Sarajevo, originally built for the 1984 Winter Olympics, and stare at the tall side wall – pockmarked with hundreds of holes. They range from small bullet holes to yawning gaps left by rockets and shells.

But these can be repaired. Bosnia’s greatest problems are the trauma that lingers, the dangerous tensions that still divide this country, and the sense that it may be back on the path to catastrophic war. That nothing, really, has changed.

To understand just how visceral those divisions are, we leave Sarajevo and drive for a few hours. Just before you get to the border with Serbia, you find the town of Srebrenica. It was here that more than 8,000 Muslim men and boys were killed, by Bosnian Serbs, in July 1995. An act of almost unspeakable callousness, led by Ratko Mladic. He assured the locals they would be safe, and then ordered a staggering wave of violence, which began, scandalously, under the eyes of United Nations troops.

There’s a huge cemetery here now. A focal point for remembrance. What strikes you are the sheer number of graves here – and also the clusters of family members buried together – fathers and sons, all killed at the same time.

Sehida Abdurahmanovic knows the pain. Her husband Jakube was killed in the opening days of the war. Her brother, Meho, was murdered during the massacre, and his remains have never been found. Her 16-year-old son survived by escaping into the woods.

“I didn’t realise what would happen,” she tells me. “I didn’t imagine that the genocide would happen, that there would be a crime of such dimensions. If I had known, I would have run for my life and I would have saved my children from everything that came. I believed in civilisation. I made a big mistake.

“When I was thinking about my son, he said he never stopped thinking about us. We were lucky. He said he would have killed himself if we had died. My brother was never found and I have never found his remains. I hope to find one bone to bury him – that would bring me comfort. So I can pray.”

The guilt of survival weighs heavily on many. Sehida’s son, like so many young people, left the country and started a new life abroad – of his class of 44 pupils, only four survived.

Ratko Mladic is now in prison, convicted of genocide. You might think his name would be a stain on this country; that he would be reviled by everyone. And you would be wrong.

In the nearby town of Bratunac, we are ushered into a large room, rather like a chapel. Around the walls are hundreds of photographs of Bosnian Serbs who were killed in the war.

“This is my cousin Augustus here,” says politician Vojin Pavlovic, as we walk round together. “His head was cut off and kicked around like a football. It was terrible.”

Pavlovic believes that the deaths of thousands of Muslims in Srebrenica – the worst massacre in Europe since the Holocaust – was not all that bad. A crime, yes, but nothing more. That the man who ordered it is simply misunderstood.

“I believe that Ratko Mladic is a hero and that he is not guilty of what he was accused and convicted of,” Pavlovic tells me. There was no genocide in Srebrenica.”

For him, the legacy of war is not about reconciliation, but about the creation, and expansion, of Republika Srpska.

Complaining that they are marginalised by the Bosniaks, who make up about half the population, Republika Srpska talks of wanting to run its own affairs and even raise its own army.

To many people, this sounds a lot like the sort of rhetoric that led to war 30 years ago, but Pavlovic is clear in his mind: “There will be no peace in this area as long as the international community represents and defends and protects only one side. That one side is the side of Muslims.”

Back in the capital, Ljubisa Cosic welcomes us into his office with a smile. The mayor of East Sarajevo has a new office that looks into the distance. He likes to take long views.

“The dissolution of Bosnia Herzegovina will happen if this state continues like this,” he says. “Bosniaks are always trying to have a centralised state. They want more and more. It’s not possible. We had a war because of that.”

So could it happen again? Could Bosnia really tumble back into conflict and division? The answer, troublingly, is a cautious “maybe”.

If Republika Srpska ever did decide to pursue independence, it would need supporters with power. As it happens, it already has a sense of kinship with Serbia, friendship with Russia.

“Personally, I love Russians more than Americans,” says Cosic. “We have a very, very strong historic relationship with the Russians and we believe in Russia.”

Pavlovic is even less equivocal. “NATO is a criminal organisation, which can only be compared with the Third Reich as a fascist organisation,” he says with a shrug.

The fear of many in western Europe is that Russia is seeking new places to foment upheaval – to distract from what is happening in Ukraine and to stretch European unity – and that Bosnia, with its divisions and volatility, may look the perfect candidate.

Through history, the Balkans have often been the crucible for violence. Few doubt that, if the spark is lit, it could happen again.