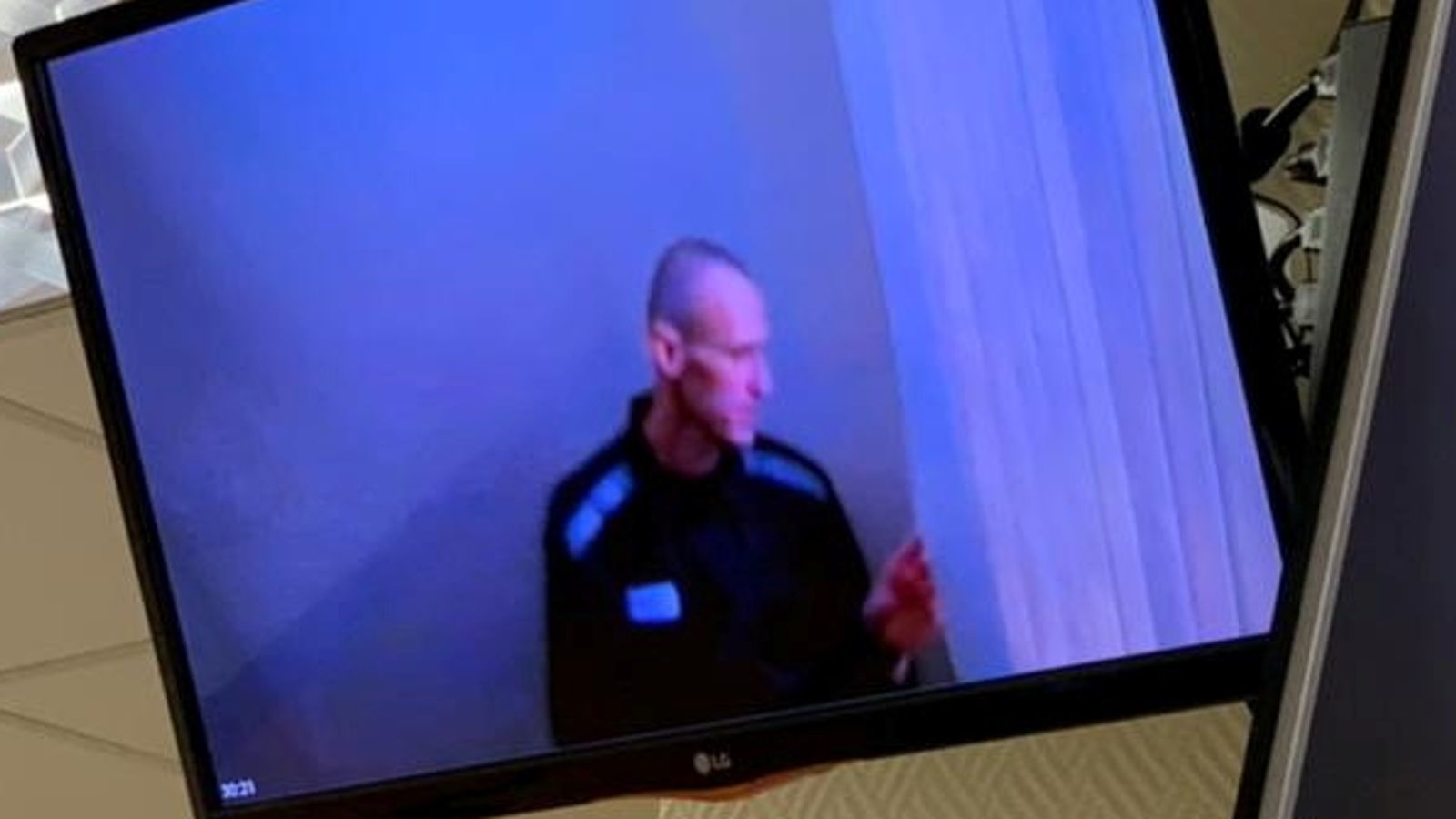 Kremlin critic Alexei Navalny has appeared in public for the first time since going on hunger strike – via video link during a court hearing.

The 44-year-old Russian opposition leader, who told the court he looks like a “creepy skeleton”, was arrested earlier this year and is serving a two-and-a-half-year sentence in a prison some 60 miles (97km) east of Moscow.

He is appealing his fine for slandering a 94-year-old Second World War veteran. He allegedly called the veteran and other people featured in a pro-Kremlin video last year “corrupt stooges”, “people without conscience” and “traitors”.

Rejecting the charges, he previously described them as another example of official efforts to disparage him.

Addressing his wife Yulia, who was in court for the proceedings, he said: “Yulia, if you can hear me, stand up for a second, I want to look at you!”

He also said that he missed her very much and since their last meeting claimed he has dropped two kilograms – and now weighs 72 kilograms.

“Yesterday I was taken to the bathhouse, there is a mirror. I looked – and I am a creepy skeleton. I weighed this much in seventh grade. If I had taken off my tunic, I would have looked much worse,” he added.

Mr Navalny, an anti-corruption campaigner and President Vladimir Putin‘s most vocal critic, began a hunger strike on 31 March to protest against the prison authorities’ refusal to let his doctors visit after he developed severe back pain and numbness in his legs.

He said on 23 April that he would start gradually ending it after receiving medical care, even as the political prospects for him and his movement darkened.

On easing his hunger strike, he told the court: “Yesterday I ate four spoons of porridge, today five spoons.

“When I get to 10 spoons, it will be a breakthrough. To get 60 grams of raw carrots, I wrote a petition, they are still considering it.”

Reporting from the court, Sky News’ Moscow correspondent Diana Magnay said Mr Navalny had asked how long the hearing would take as he had lunch and did not want to miss it.

She said he sat with his arms folded, wearing dark glasses, and looks like a “diminished figure” and “clearly thinner” – but said the camera angle did not help as he was squeezed into a corner of a grey cell.

It is believed to be the first time she would have seen him too – if only by video link – since he ended his more than three-week hunger strike.

On Monday, prosecutors asked the court to prohibit Mr Navalny’s groups from publishing anything online, organising protests and taking part in elections.

Ahead of the court hearing on Thursday, his team said it was officially disbanding its network of regional campaign offices across Russia.

It comes after Mr Navalny’s chief of staff Leonid Volkov said on Monday the group would continue its work, including investigations into corruption, and that it was “not going to give up”.

Navalny allies also said on Thursday that Russian authorities have opened a fresh criminal case against the politician.