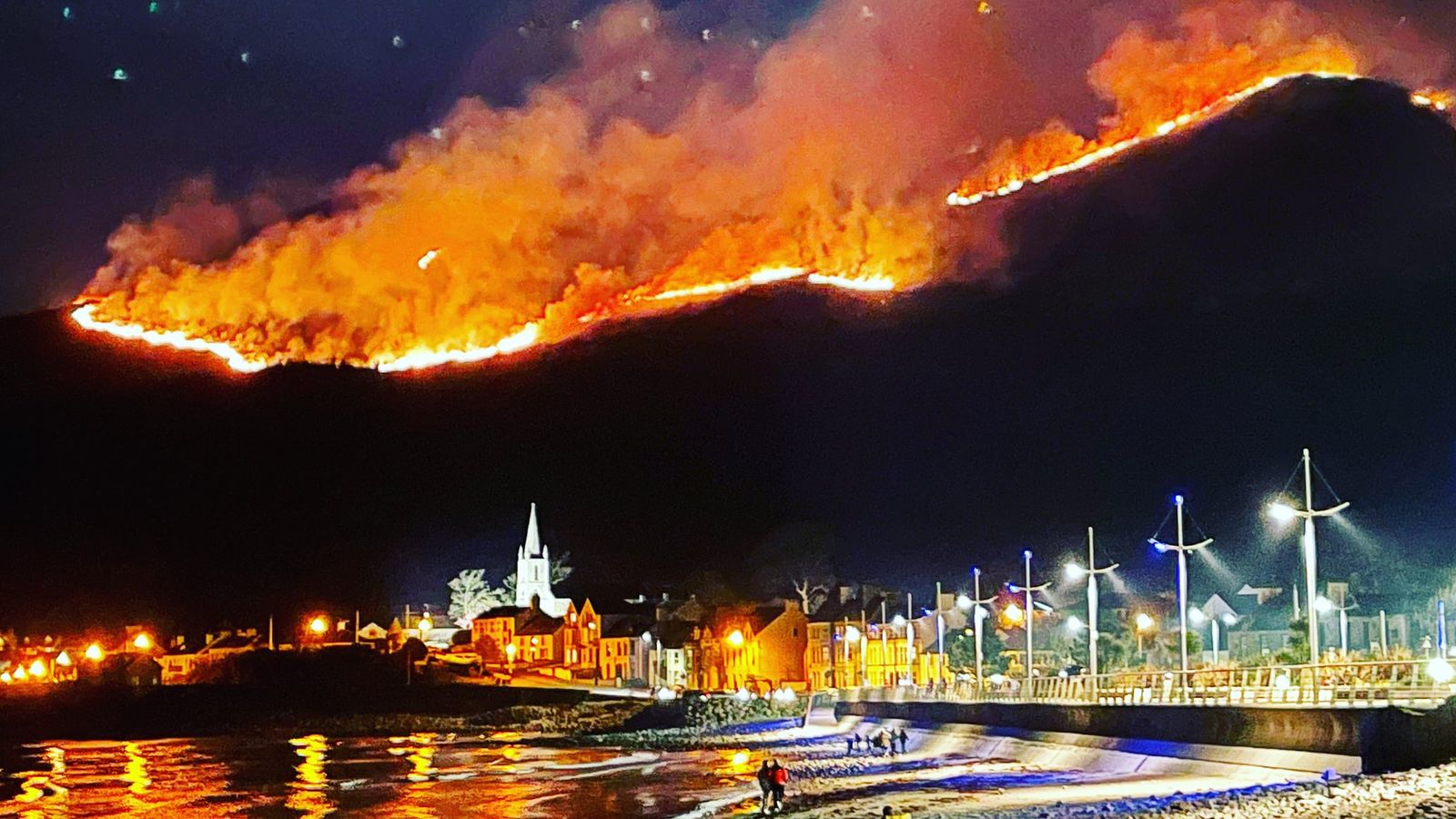 A huge wildfire on Northern Ireland’s Mourne Mountains, declared a major incident by the Fire and Rescue Service (NIFRS), is causing “incredible” damage to the environment.

Seventy firefighters and 10 fire appliances, deployed from stations across Northern Ireland, are continuing to battle the inferno on the country’s highest peak, Slieve Donard.

Firefighters on the front line said the biggest challenges were access to the terrain, exhaustion from the heat and working in PPE, and transporting water.

Damage at what had been the seat of the fire takes your breath away – Sky News was taken there by the NIFRS.

Mark Smith, wildlife lead for the service, said: “It’s incredible the damage that’s being done here. Our wildlife have been seriously impacted.

“It’s a very, very large area… we’re still measuring the exact size of it… but at present, there will be a large impact on the environment and eco-systems in this area.”

Dramatic pictures of the blaze captured overnight showed rings of fire on the mountain, illustrating why firefighting resources were later escalated at the tourist location.

With an Irish Coastguard helicopter providing support for the NIFRS, it became a cross-border, multi-agency operation in County Down.

Sinn Fein’s Chris Hazzard, the local member of parliament, said Slieve Donard and the Mournes looked like “volcanoes exploding” and that had caused residents real alarm.

It has been one of the driest Aprils on record, increasing the risk of wildfires, and the experts suspect they know what caused the fire.

Assistant Chief Fire Officer Aidan Jennings told me: “My experience over many years in the Fire and Rescue Service is that very few of these fires start outside human activity so my expectation is we will find this was a deliberate fire.

“I would appeal to the public, landowners and all, to work with us to prevent that,” he added.

By rotating firefighters in and out, they had managed to contain the fire at the spot where we were taken – but it was still smouldering.

The blackened ground beneath our feet, usually blooming with heather, confirmed that the environmental damage had already been done.

For tens of thousands of species and their young, nesting in the mountains at this time of year, it is already too late.

The firefighting teams we spoke to were clearly distressed by that. They are exhausted – but for now they are winning.

New rules for energy companies after billions spent on collapse of suppliers
London firefighters who abused colleagues face the sack as report reveals toxic culture
‘Heated’ and ‘really ugly’: Europe fails to thrash out details on gas price cap as talks turn sour
It’s about to be way easier to make a smart home. Here’s what you need to know
The Taylor Swift tour Ticketmaster chaos explained