The prime minister has said “you’re out of your mind” if you think there is “something dodgy” about his texts with billionaire Sir James Dyson.

Boris Johnson renewed his defence of his communications with the entrepreneur over securing ventilators during the early stages of the COVID-19 pandemic.

The BBC reported earlier this week that the PM promised Sir James he would “fix” a tax issue for staff working to develop ventilators in the early days of the COVID-19 pandemic.

“If you think that there’s anything remotely dodgy or rum or weird or sleazy about trying to secure more ventilators at a time of a national pandemic and doing everything in your power to do that, then I think you are out of your mind,” Mr Johnson said.

“When you’re facing a pandemic and you’ve got 9,000 ventilators as we had – that’s all we had – and, to the best of our knowledge, putting people on ventilation was the only way to help people who are really in difficulties with COVID, of course it was right to get the best of British manufacturing together as we did with the ventilator challenge.

“To say to them ‘come on, we’ve only got a few days now, see how many ventilators you can build’ – and in the end, they came up with 22,000 more ventilators and it was actually described by the Labour Party and by our opponents, when they were using some common sense, as a benchmark for public procurement.

“I also think it was completely the right thing to do.”

The PM said the government would be publishing his contacts with Sir James later on Friday. 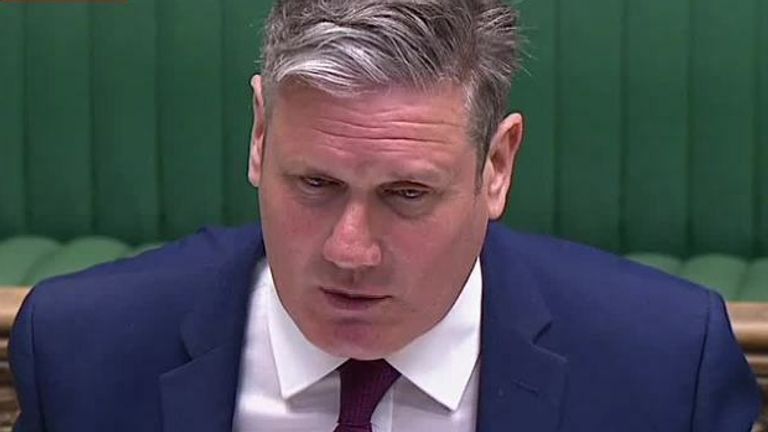 And he rejected suggestions he needed to rethink how people communicated with him, responding: “No. I need to maintain…to be in touch with people.”

Asked if he would be keeping hold of his phone, Mr Johnson smiled and said: “You need one these days.”

Sir James has said it is “absurd to suggest” his company was doing anything other than trying to follow the rules.

“We were in the midst of a national emergency and I am hugely proud of Dyson’s response – I would do the same again if asked,” he said.

The PM’s comments come after former aide Dominic Cummings was blamed in a number of media reports for leaking his text messages.

Downing Street sources were quoted in The Sun, Times and Daily Telegraph pointing the finger at Mr Cummings.

Mr Cummings, who left Number 10 last year amid a bitter power struggle, has not responded to the allegations.

When asked about the reports at a regular Westminster briefing with journalists, the PM’s spokesman said he would not comment on “speculation”.

An internal inquiry has been launched into how messages between Mr Johnson and Sir James were leaked to journalists.

:: Subscribe to the All Out Politics podcast on Apple Podcasts, Google Podcasts, Spotify, Spreaker

It has also been revealed that Mr Johnson was sent a message by Saudi Crown Prince Mohammed bin Salman as an attempt to buy Premier League side Newcastle United encountered difficulties last June.

The Sun quoted a source in Number 10 as saying that the PM “fears Dom was responsible for the text message leaks about James Dyson and Mohammed bin Salman”.

A source quoted by The Times said a “bitter” Mr Cummings was “engaged in systematic leaking” and this had left the PM “saddened”.

Meanwhile, a source told the Daily Telegraph: “If you join the dots it looks like it’s coming from Dom.”

The newspaper said it understood that Mr Cummings would have had legitimate access to the messages when he worked in Downing Street.

Speaking on a campaign visit to Hartlepool, Labour leader Sir Keir Starmer hit out at the “quarrelling at the centre of government”.

“Now we’re getting arguments and quarrelling at the centre of government about who is leaking information about privileged access,” he said.

“Boris Johnson is desperate to try to put this at arm’s length, but it’s obvious that he can’t. This is government by WhatsApp, they’re all at it.”