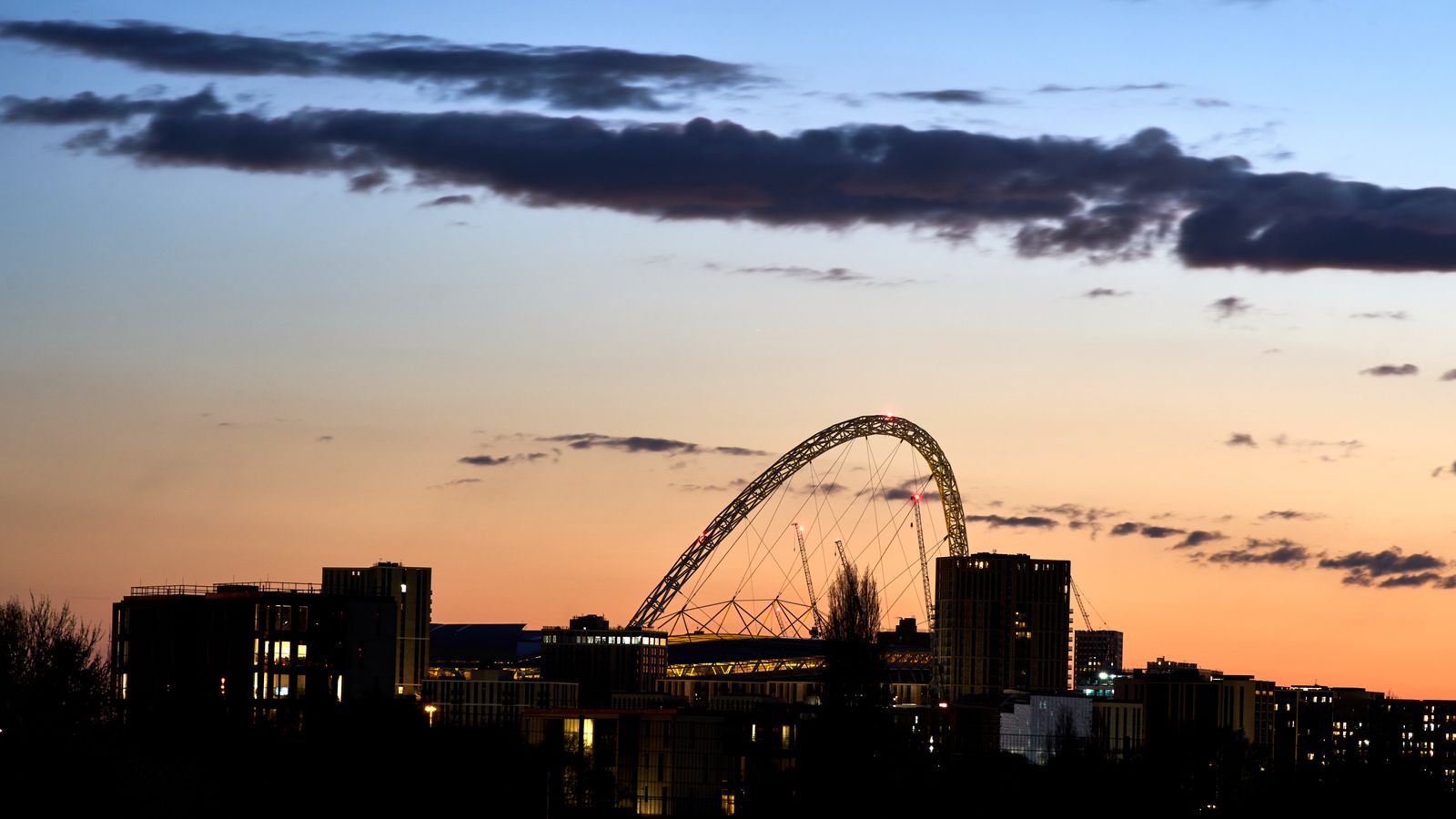 Thousands of fans will return to Wembley Stadium for the first time in more than a year on Sunday as part of a coronavirus trial.

The FA Cup semi-final between Leicester City and Southampton will see 4,000 supporters in the stands – a fraction of Wembley’s 90,000 capacity.

Sunday’s game, alongside the World Snooker Championship and two gigs in Liverpool, are part of the government’s Events Research Programme (ERP).

Ministers plan to slowly allow attendees to abandon face masks and social distancing measures to gauge how larger events can take place safely as we come out of lockdown.

It will also trial the idea of COVID certification to unlock parts of society, a concept which has been highly contested by politicians thus far.

The indoor snooker tournament at the Sheffield Crucible Theatre is only allowing around 300 fans in – to facilitate social distancing – this weekend.

But gradually numbers will rise to half and then full capacity over the 17-day championship, which is about 1,000 seats.

On 15 May – two days before the government is due to ease lockdown further – the FA Cup final at Wembley will take place with 21,000 fans.

Anyone who attends any of the trial events will have to prove they have had a negative lateral flow test (LFT) result in the past 36 hours.

They will also have to take a laboratory PCR test five days afterwards.

All participants will have consented to taking part in the government’s research programme, and Test and Trace data will be shared with local authorities to detect any outbreaks following the events.

In Liverpool, the government is testing how music events can operate safely without social distancing measures.

A night at the Circus Nightclub in the city on 30 April will not require people to wear face masks or practice social distancing, but will have a reduced capacity.

Attendees will not have to social distance from others or wear a face mask, but will have to prove a negative LFT result within the previous 24 hours.

They will also have to provide their data to NHS Test and Trace.

Professor Iain Buchan, chairman of public health, clinical informatics, faculty of health and life sciences at Liverpool University said the risk of an outbreak following one of the trial events is “about one in several thousand people”.

“It will vary between the different events, but this is very much an ethically thought through careful science led programme that we’ll be pursuing,” he said.

The government will look at things like ventilation to see how it can mitigate risks.

Culture Secretary Oliver Dowden said: “We’re one step closer to a summer of live events now our science-led programme is under way.

“Testing different settings and looking at different mitigations is key to getting crowds back safely.

“The Sefton Park pilot is an important addition to the programme … I hope it won’t be too much longer until gigs are back for good.”

According to the roadmap out of lockdown, from 17 May indoor venues can operate with 1,000 people or at half-capacity – whichever is lower.

Outdoor venues are allowed 4,000 people or half capacity, whichever is lower.

And large outdoor venues will be allowed 10,000 people or a quarter of capacity, whichever is lower.

If data milestones are met, the government plans to remove all social limits from 21 June, but “this will be subject to the results of the scientific Events Research Programme”.

From Slam Diego to the Oakland Zzzz’s: Way-too-early 2023 MLB lineup rankings
Girl, 15, dies and boy, 16, in hospital after stabbing – as teen arrested for murder
Business failures hit highest level since 2009 after end of pandemic support
The ‘tear-gassed’ Palestinians trying to stop Israeli settlers occupying their land
‘It changed me’: The investigation into one of history’s worst space disasters – and its legacy