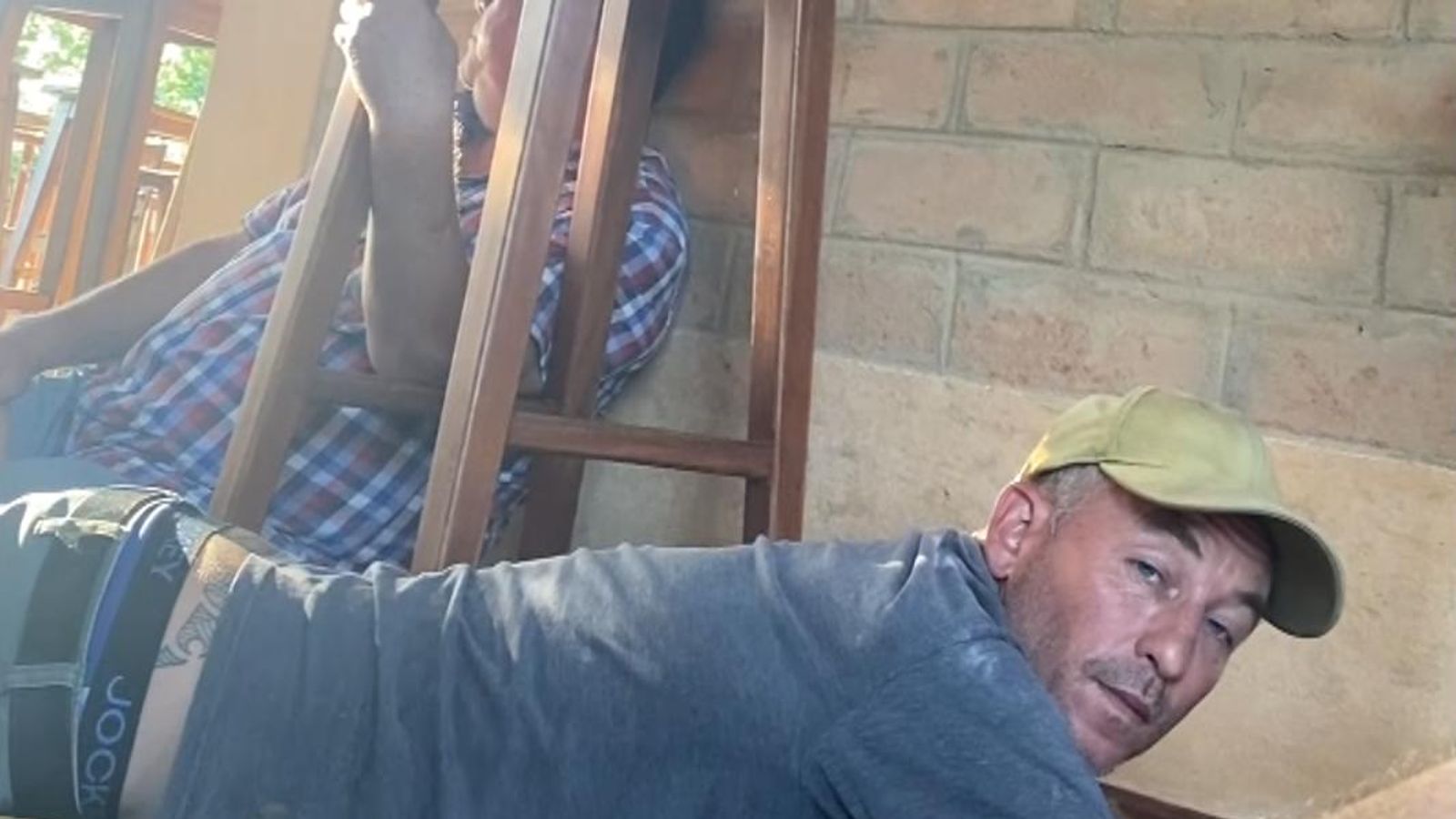 Pictures shared with Sky News, taken by survivors of the Palma terror attack in Mozambique, give a graphic illustration of a terrifying three days under fire, surrounded by insurgents.

Nearly 200 people – including foreign workers – took refuge in one of the town’s hotels.

But survivors have told Sky News how they fled for their lives because they felt they’d been abandoned and no one was coming to rescue them.

One South African contractor spoke of almost constant shooting and shelling during the three days they were trapped inside the Amarula Lodge in Palma.

Wesley Nel filmed on his mobile phone throughout and his footage shows those pinned down in the Lodge – including his brother Adrian and father Greg – lying on the floor of the hotel’s upstairs restaurant as a volley of gunfire is heard.

“And it went on constantly for three, four days.

“They [the insurgents] must have been stockpiling tonnes of ammunition nearby or in the town for months before.”

Mr Nel, his father and brother were sub-contracted to work on the huge multi-billion-dollar LNG (liquified natural gas) project being developed on the Afungi Peninsula near to Palma.

They had been told, despite militant unrest around the northern Cabo Delgado Province since 2017, that the town of Palma was secure and stable.

But when, on 24 March, the insurgents mounted their most audacious attack so far, it seemed to take the military and the police completely off-guard.

British contractor Philip Mawer, went missing in the melee and a body was later found matching his description.

A week after the attack, Islamic State extremists said they had carried out the attack. But little is known about the group called ISIS Mozambique (also known locally as al Shabaab).

Many analysts believe the ISIS flag is simply one of convenience with many more complex layers at the heart of the insurgency including geo-political rivalries over Africa’s largest oil and gas investment as well as discontent over economic inequalities in the country.

The vast natural resources are just off the coast of Mozambique’s poorest province.

The Palma attack was vicious, brutal and appeared to have a level of planning. It came only hours after the French gas giant Total announced it was resuming work on the LNG project after months of hiatus over security concerns.

When shooting broke out in the town, the foreign workers who were stationed near to the lodge headed straight there.

It was considered secure and had high perimeter walls and a helicopter landing pad for airlifts.

“We, 100% thought we were going to get out by helicopter [on the first day of the terror attack],” Mr Nel said.

But he said only helicopters manned by the private security company DAG appeared to mount any rescue attempt.

DAG’s small helicopters could only airlift six people at a time. Women, children and the sick were loaded on first with more than 20 being taken to safety in Pemba.

But with light fading and fuel running out, the controversial security company which had only weeks earlier been accused of war crimes by human rights groups, halted its rescue mission.

The civilians trapped inside the Amarula Lodge used the satellite phones they had among them, to appeal for help from the Mozambican military, from their employers, from anyone.

“We said to them, we’re sitting ducks… we’ve got nothing to protect ourselves,” Mr Nel told Sky News.

The footage shows the group left behind in the hotel still appearing to believe there would be further attempts to take them out of what was now a battle zone.

They are filmed sitting and standing around with small bags ready to flee. But the help never came.

“We knew the insurgents were getting closer,” said Mr Nel. “It was only a matter of time before they breached the gates and we were slaughtered.” 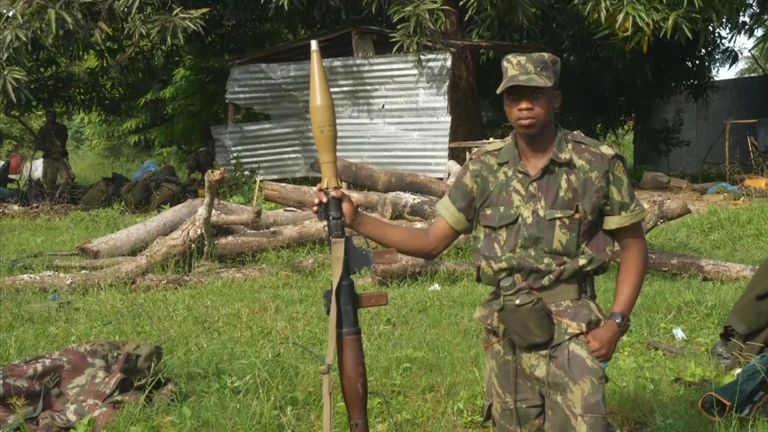 Mozambique: Inside the town destroyed by IS

In desperation, his elder brother Adrian hatched a plan to run out of the lodge gates to try to recover a weapon they believed had been hidden in one of the parked vehicles outside.

It took him three runs to find it. You can hear his brother Wesley urging him on as he films him tearing across the road.

“Come on Adrian, come on!” he can be heard saying.

“Ordinarily he’d have got a medal of honour,” his brother said.

But with just a single weapon between them, and some abandoned flak jackets left behind in the hotel by aid agencies, the group decided to organise a convoy of vehicles, pack as many people in as possible and take their chances outside.

The mobile phone video shows the back of one pick-up truck crammed full of people waiting to bolt out of the hotel gates.

“We were determined to take everybody who wanted to go. We had four people in the boot of just our car,” Mr Nel said.

His brother Adrian opted to be one of the drivers.

“You’ve got the drive of your life bro,” his younger brother can be heard saying to him on the footage.

But only two minutes outside the gate, the convoy of 17 vehicles was ambushed.

Vehicles stopped, Mr Nel said, and there was panic and frantic running into the bush as well as into other cars.

The convoy continued with the brothers’ vehicle about fourth from the front, only to run into another ambush as militants shot at specifically the drivers from the side of the road.

Adrian was hit, twice. His brother relays what happened.

“He started shouting that he’s hit, he’s hit and his leg was off and he can’t drive… someone needs to take over…and everyone was shouting keep driving as far as you can.

“He was like, I’m trying. Probably about a kilometre after, he was saying I can’t… I’m going guys, I’m going…”

His brother pulled over to the side and when Wesley reached him, he was shaking uncontrollably. Now the younger brother took over the driving.

“I was holding his shoulder over the bullet wound trying to stop the blood and it was just pumping out,” said Mr Nel.

“I started to drive and I was just shouting back at them, to put the other doses inside the gunshot wounds to stop the bleeding.”

And all the time, his younger brother is trying to reassure him of his love.

Mr Nel breaks down as he remembers: “I was shouting that I love him and that I’d look after his family and that I’m so, so sorry that this had happened to him.”

He managed to drive the vehicle to the quarry where they were hoping helicopters might be able to land to pick them up. But still there were none.

The men fled into the thick bush nearby and camped out all night and until well into the next day before emerging.

This time they managed to reach a DAG helicopter which flew them to the nearby Afungi airstrip.

“I begged them to go back and retrieve my brother’s body,” said Wesley. “I wasn’t going to leave him there.”

The DAG team followed through on its promise, retrieved his brother’s body and with Mr Nel laying next to his dead brother in the helicopter, they were taken onto Pemba – and then flown back to South Africa.

Now he says friends and family have started crowdfunding to raise money for his brother’s young family. He leaves behind a wife and three young children.

“We did everything for everybody and it felt like no one was doing anything for us,” said Mr Nel.

“And my brother paid the ultimate price… they just abandoned us and now I’m left with this… I can’t understand why there wasn’t foreign military in there that could help us.”

There are still more than 20,000 people unaccounted for more than two weeks after the Palma terror attack.

The Mozambican authorities have sent hundreds of soldiers into the town and have declared it free of terrorists.

The Mozambican President, Felipe Nyusi has called for unity and promised a huge job creation scheme and there have been expressions of solidarity among the southern African countries which make up SADC.

But the insurgents still hold the strategically important port of Mocimboa da Praia and the challenge will be for the authorities to regain control there and crush the insurgency before it spreads further.

Aston Martin keeping options open as Saudis weigh possible £200m investment
Big technology stocks like Tesla, Amazon and Microsoft just finished their worst quarter in years
International Asteroid Day 2022: How Asteroids Were Formed, Why They Could Pose a Threat to Earth
Six of the best bits you might have missed at Glastonbury
North Korea claims it has identified source of its COVID outbreak