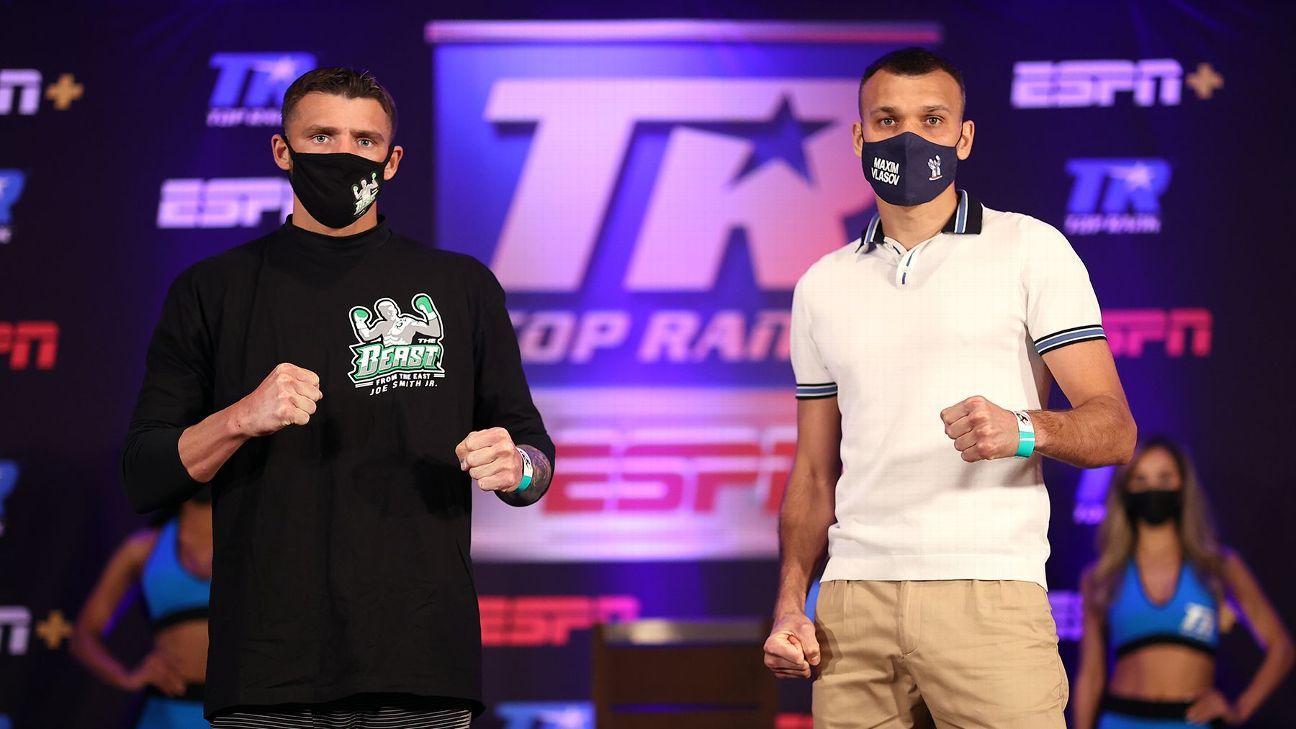 Joe Smith Jr. did not take the path of least resistance to reach his second shot at a light heavyweight world title. As he prepares to step into the ring on Saturday against Maxim Vlasov at the Osage Casino in Tulsa, Oklahoma (10 p.m. ET, ESPN and ESPN+), with the vacant WBO belt on the line, Smith has been through the spectrum of the highs and lows that come with championship-level boxing.

After getting knocked out in his seventh professional fight back in 2010, Smith (26-3, 21 KOs) rattled off 15 wins over the next five years in the leadup to two victories that changed his career — a first-round TKO win over Andrzej Fonfara, followed by a KO of Bernard Hopkins in which Smith knocked Hopkins out of the ring and ended his career with one punch. Smith was an underdog in both of those fights, and he’d continue to carry that tag as the fights got even bigger.

In 2017, Smith knocked Sullivan Barrera down in the first round and appeared to be on track to carry his momentum straight into a world title shot. But Barrera fought back and earned a decision win, sidelining Smith’s hopes and breaking Smith’s jaw in the process. After another first-round KO win, Smith was again thrust into the spotlight against one of the light heavyweight division’s two standout world titlists, Dmitry Bivol. Bivol thoroughly stifled Smith and denied him throughout in a one-sided unanimous decision victory in March 2019.

Top Rank Boxing is on ESPN and ESPN+. Subscribe to ESPN+ to get exclusive boxing events, weigh-ins and more.

But Smith, now 31, didn’t take the easy path back to the top. He beat former world title challenger Jesse Hart, then knocked out former world titleholder Eleider Alvarez to bookend 2020, setting up his showdown with Vlasov. This fight was scheduled for Feb. 13 before Vlasov tested positive for COVID-19 two days before and it was postponed for Saturday.

Vlasov (45-3, 26 KOs) is no pushover. The 34-year-old Russian fought long stretches of his career at cruiserweight and even challenged for an interim title in a division that’s 25 pounds heavier than where he’s currently fighting. He gave undefeated former super middleweight world titlist Gilberto Ramirez all he could handle when they fought in 2015.

The combined unyielding stubbornness and determination of Smith and Vlasov projects to make for a fight with high stakes and plenty of tension. Smith’s style in the ring follows his approach to fighting, moving forward at all times. Vlasov counterbalances that with his counterpunching ability and efforts to fight on the outside.

Nothing is promised in boxing, and this fight represents everything that Smith has been after in his career — world titles and big money fights. The only questions left are how Smith handles being the betting favorite this time around, and if he can make the final step to the top.

2: This is Smith Jr.’s second title fight. He lost to Dmitry Bivol on March 9, 2019 for the WBA light heavyweight title.

1: Smith is the only fighter to stop Hall of Famer Bernard Hopkins, in what was Hopkins’ final fight on December 2016.

Amid the coronavirus pandemic that slowed down the careers of a lot of fighters, welterweight Jaron “Boots” Ennis was able to fight three times. And while his bout against Chris van Heerden in December ended in a first-round no contest after van Hardeen suffered a cut from an unintentional headbutt, Ennis scored impressive KO victories over Juan Carlos Abreu and Bakhtiyar Eyubov.

On Saturday, Ennis (26-0, 24 KOs), 26, will face the most difficult opponent of his career so far in former junior welterweight world titlist Sergey Lipinets, in the main event of a Showtime Championship Boxing card at Mohegan Sun Arena in Uncasville, Connecticut (9 p.m. ET).

“This is the type of fight I’ve been waiting for. I can’t wait to perform and put on a beautiful show,” said Ennis when the fight was announced. “Y’all will see something special out of me come fight night. I’m excited to be the main event. It’s time for me to shine!”

Lipinets (16-1-1, 12 KOs), 32, who owns KO victories over Leonardo Zappavigna and Lamont Peterson, is an experienced fighter whose only loss came in a decision against Mikey Garcia three years ago.

“We have a tough, young fighter in Ennis who thinks I’m a stepping stone for him. But sometimes stepping stones trip you up, and I’ll be doing my best to trip him up” said Lipinets. “I’m just doing my best to get prepared for what I expect to be a dog fight. Every fan that knows boxing knows that this is going to be a real war and worth tuning in for. I expect we’ll be fighting in a phone booth at times, but I also expect him to try to use his reach and fight me at a distance at times. But no matter what he does, I’ll be ready for him.”

Philippine’s Ancajas (32-1-2, 22 KO) hasn’t fought since defeating Miguel Gonzalez in December, 2019. The fight against Rodriguez was originally planned for December 2019, and then for April 11 of 2020, but was postponed due to the coronavirus pandemic. With a victory on Saturday, Ancajas is looking for his ninth consecutive title defense.

Rodriguez (22-1, 16 KO), of Mexico, has won six fights in a row, five by stoppage. He last fought in December, a first-round KO victory of Julian Yedras in Monterrey.

“I am very exited to finally get back in the ring,” Ancajas told ESPN by e-mail on Wednesday. “It has been over 15 months since my last fight. I am not taking Jonathan Javier Rodriguez lightly. I know he is a very hungry fighter and the best match-ups are between Philippines vs. Mexico. My goal, if I am victorious, is to get fights with the other champions in the division.”

Conor Benn looking to the future

Unbeaten Conor Benn is hoping to take another step towards a title opportunity. After starting his career with 17 straight victories, Benn is facing his toughest test so far against veteran former title challenger Samuel Vargas, in the main event of a DAZN card at the Copper Box Arena in London on Saturday.

Vargas (31-6-2, 14 KOs) has been in the ring with Errol Spence Jr., Danny Garcia, Vergil Ortiz and Amir Khan, among others, and brings lots of experience. He had two hard-fought fights in 2019, a split decision loss to Luis Collazo and a unanimous decision victory over Silverio Ortiz. In 2020 he had some good moments against Virgil Ortiz Jr. before losing by KO.

Benn (17-0, 11 KOs), 24, didn’t look impressive in his last fight in a unanimous decision victory over Sebastian Formella in November, but he’s not worried about the past as he focuses on improving his technique.

“You can judge me on my last performance, or the performance before that, but I’m always evolving and learning from previous fights and the mistakes I’ve made,” said Vargas during a press conference on Thursday. “This is the sort of fight where I really do show what I’m capable of.

“We don’t know the ceiling to my career, we don’t know where the limit is because I came into the game raw and naive. I’m learning and I plan on displaying all of that come Saturday night.”

More on Benn vs. Vargas…

Shop prices yet to hit their peak – despite record highs seen in January
Europe’s crackdown on Big Tech omitted TikTok — but now that’s set to change
Some of Wall Street’s biggest names are exposed to the Adani Enterprises plunge
US general warns British Army no longer top-level fighting force, defence sources reveal
‘It changed me’: The investigation into one of history’s worst space disasters – and its legacy