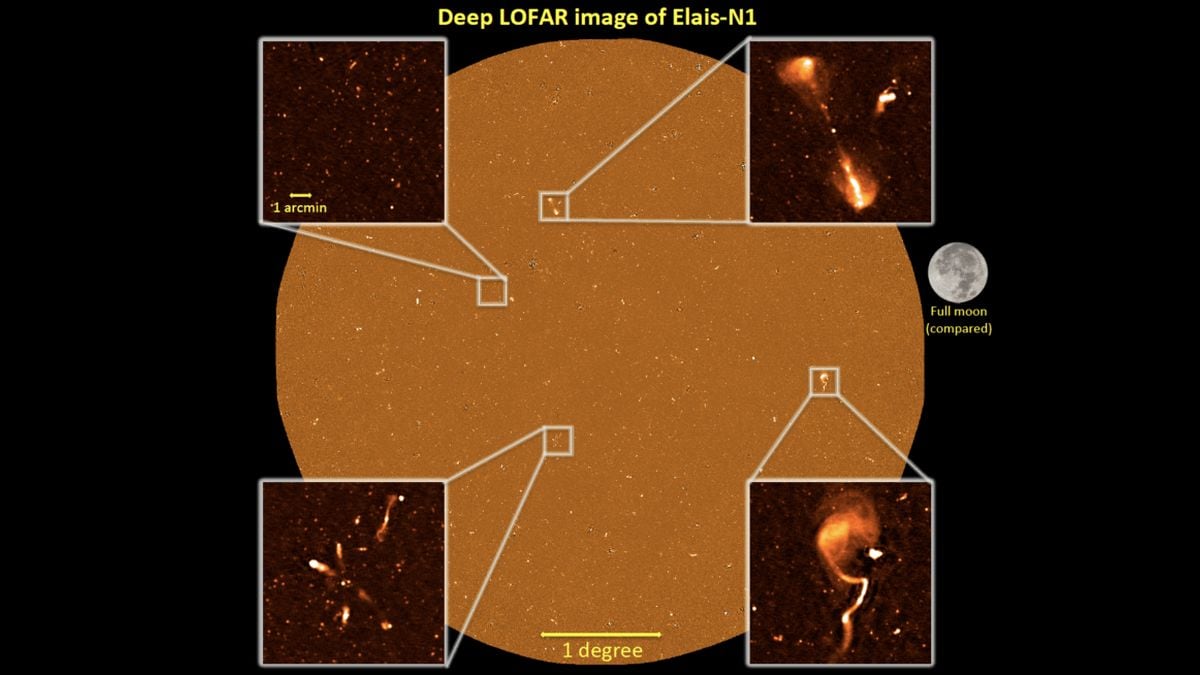 The images capture drama billions of years ago in the early Universe – glinting galaxies, glowing with stars that have exploded into supernovas and blazing jets fired from black holes.

Europe’s giant LOFAR radio telescope has detected stars being born in tens of thousands of distant galaxies with unprecedented precision, in a series of studies published Wednesday.

Using techniques that correspond to a very long exposure and with a field of view about 300 times the size of the full Moon, scientists were able to make out galaxies like the Milky Way deep in the ancient Universe.

“The light from these galaxies has been travelling for billions of years to reach the Earth; this means that we see the galaxies as they were billions of years ago, back when they were forming most of their stars,” said Philip Best, of Britain’s University of Edinburgh, who led the telescope’s deep survey in a press release.

The LOFAR telescope combines signals from a huge network of more than 70,000 individual antennas in countries from Ireland to Poland, linked by a high-speed fiber optic network.

They are able to observe very faint and low energy light, invisible to the human eye, that is created by ultra energetic particles travelling close to the speed of light.

Researchers said this allows them to study supernova star explosions, collisions of galaxy clusters and active black holes, which accelerate these particles in shocks or jets.

By observing the same regions of sky over and over again and putting the data together to make a single very-long exposure image, the scientists were able to detect the radio glow of stars exploding.

“When a galaxy forms stars, lots of stars explode at the same time, which accelerates very high-energy particles, and galaxies begin to radiate,” said Cyril Tasse, an astronomer at the Paris Observatory and one of the authors of the research, published in a series of papers in the journal Astronomy & Astrophysics.

Around 3 billion years after the Big Bang, he said “it really is fireworks” in the young galaxies, with a “peak of star formation and black hole activity”.

The telescope focused on a wide stretch of the Northern Hemisphere sky, with the equivalent of an exposure time 10 times longer than the one used in the creation of its first cosmic map in 2019.

“This gives much finer results, like a photo taken in darkness where the longer your exposure, the more things you can distinguish,” Tasse told AFP.

The deep images are produced by combining signals from the telescope’s thousands of antennas, incorporating more than four petabytes of raw data – equivalent to about one million DVDs.

What is the best phone under Rs. 15,000 in India right now? We discussed this on Orbital, the Gadgets 360 podcast. Later (starting at 27:54), we speak to OK Computer creators Neil Pagedar and Pooja Shetty. Orbital is available on Apple Podcasts, Google Podcasts, Spotify, and wherever you get your podcasts.

Haiti is falling apart and there is no safety net – the perverse reality is that gangs have filled the gap
Some of Wall Street’s biggest names are exposed to the Adani Enterprises plunge
Trump kicks off 2024 White House bid – and says he’s ‘more committed than ever’
Quick Charge Podcast: February 2, 2023
Spot the Sussexes: Harry and Meghan at Ellen DeGeneres’s surprise wedding vow renewal