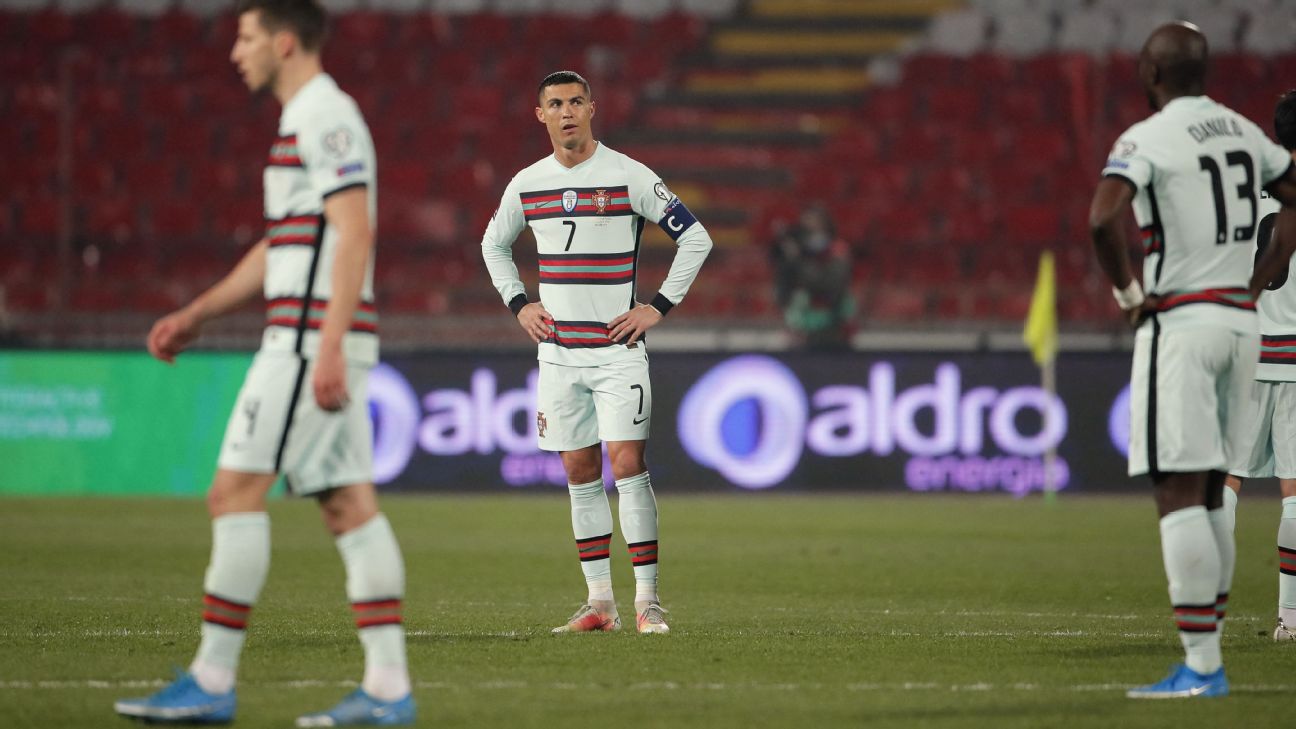 World Cup qualifying kicked off across Europe last week and there was plenty of drama involving top national teams as they began on the road to Qatar in 2022. Portugal were furious for Saturday’s draw vs. Serbia, England picked up a couple of tidy victories and Germany showed their best — and their worst — over the weekend.

It’s Monday, and Gab Marcotti reacts to the biggest moments in the world of football from the past weekend of internationals in Europe.

Ronaldo right to be angry about lack of VAR, Goal-Line Technology…

Cristiano Ronaldo was furious. He walked off the pitch Saturday waving his arms with all the disgust and anger of a man who had just been sentenced by a kangaroo court with the honorable Jabba the Hutt as judge and Larry, Curly and Moe as jurors. He threw his captain’s armband to the ground, cameras zooming in on the blue band with the upside-down “C” lying on the Marakana pitch in Belgrade.

Stefan Mitrovic had just cleared Ronaldo’s shot. TV cameras — and Ronaldo’s own perspective — showed that it had crossed the line. It was deep in injury time, and would surely have been the winner in a match that eventually ended in a 2-2 draw. But referee Danny Makkelie didn’t see it cross the line. Neither did his assistant, and with no VAR or Goal Line Technology — either would have correctly called the goal — there was nothing to be done.

Portugal were furious because yeah, the stakes really are that high. They’re in a World Cup qualifying group with Serbia, Ireland, Azerbaijan and Luxembourg: winner goes directly to Qatar 2022, the runner-up goes into the playoffs. Those extra two points mattered: get stuck in the playoffs and anything can happen, given that they’re single-legged elimination games. It’s not just the economic loss, but the enduring sense of injustice, made worse that it’s amplified across a nation and compounded by the knowledge you don’t get another shot for another four years.

There is no VAR in UEFA World Cup Qualifying because not every stadium is equipped for it, and because of the supposed sanctity of the rule, whereby every game must be standardised and played under the same rules, it was either VAR for all, or VAR for nobody. But the logistics of equipping every ground within all 55 UEFA nations were too problematic, so the decision was taken to shelve plans for VAR in the UEFA qualifying tournament.

I don’t necessarily have an issue with choosing not to spend money on making every stadium compliant, though more than two-thirds of UEFA member nations have at least one stadium that is equipped for VAR, so I can’t imagine the cost of getting the others up to code would be exorbitant. I just don’t see why — as the FA Cup does — you can’t limit yourself to using it when it’s available. (By the way, the Marakana, where Serbia hosted Portugal, is VAR-compliant: it was used a few weeks ago when Milan played Crvena Zvezda in the Europa League.)

Something, after all, is better than nothing.

Craig Burley reacts to the controversial ending of Portugal’s 2-2 draw vs. Serbia in World Cup qualifying.

There’s no “level playing field” argument to be made here — not when they’ll be using VAR at the World Cup, which, lest we forget, is merely the continuation of these qualifiers. If anything, you’re creating an uneven playing field and making the referees’ jobs harder: most are accustomed to working with VAR, and then they’re suddenly asked to make big calls without it.

It’s not surprising that according to Portugal coach Fernando Santos, referee Makkelie apologized afterwards. But, to be honest, you can’t even blame him: he’s an excellent referee, he was at the other end of the pitch when Nuno Mendes hit his long pass to Ronaldo: he simply couldn’t have had a clear view and neither did his assistants.

I get that some people hate VAR, either because they’re philosophically opposed to it (which I can respect, while disagreeing) or because they’re infuriated by its implementation (whether it’s offsides or handball or whatever). But that ship has sailed. VAR will be at the World Cup. We see VAR every week in most European leagues. It was designed to wipe out the most grotesque errors… like this one. And it does a pretty good job at it.

Oh, and while we’re at it, let’s not get on our high horse about Ronaldo throwing the captain’s armband and being disrespectful. It’s a piece of cloth that fits around his bicep, not some holy artifact. As my colleague Steve Nicol pointed out on the ESPN FC show, if he’d had anything else on him that he could throw, he would have thrown that. You can criticise Ronaldo for many things if you so choose, but not being attached to his country or his role as captain isn’t one of them.

… but Portugal have plenty to figure out

Ronaldo’s goal should have stood, but Fernando Santos can’t be happy with the way Portugal raced to a 2-0 lkead and then crumbled in the second half. They didn’t just concede twice; Sergej Milinkovic-Savic came very close to scoring as well, and Anthony Lopes needed a minor miracle to keep out Dusan Tadic. Meanwhile winger Nemanja Radonjic, who came on at half-time, was ripping them to shreds.

This is a very talented Portugal side, but the balance doesn’t seem to be there yet. Playing Ronaldo as a lone striker — even with Bernardo Silva, Diogo Jota and Bruno Fernandes in support — simply won’t get the best out of him, as we’ve seen with Juventus. There has to be a way to get Andre Silva on the pitch on the pitch going forward, even if it means sacrificing an attacking midfielder.

Janusz Michallik believes fans should and can be excited about England’s chances in Euro 2020.

It wasn’t long ago that you could easily imagine an England side freezing up in a match like Sunday’s, when they took on minnows Albania in Tirana. Edy Reja’s theoretical 3-4-3 was more of a 5-4-1 as they tidily clogged spaces and happily left England a ton of sterile possession. They even gave them a scare on the counterattack.

Then came Harry Kane‘s header and everything changed in the second half as Gareth Southgate’s crew rolled to a 2-0 win. They looked like a mature, confident team, well aware of their weaknesses (neither Kalvin Philips nor Declan Rice will be mistaken for Kevin De Bruyne any time soon, which means you probably won’t get them playing a killer through-ball from midfield) but also their strengths: they can physically outlast opponents and they can use the space in wide areas well to set up Kane.

The win relieves some pressure ahead of Wednesday’s game against Poland, who will be without Robert Lewandowski.

Germany far better than scoreline suggests, but they nearly threw it away

Jurgen Klinsmann praises the performance of Serge Gnabry in Germany’s 1-0 win over Romania.

All eyes were on Jogi Low’s Germany side, ahead of his departure after the Euros, as they played Romania on Sunday.

If you insist on Jogi-hating, you’ll focus on the fact that this game could easily have ended in a draw following a boneheaded giveaway from Leroy Sane in the final minutes. But that would be reductive. Germany dominated and created plenty of chances, despite lacking a natural center-forward. (Then again, when Serge Gnabry plays like this, he does virtually everything you want a modern striker to do.)

That midfield trio of Ilkay Gundogan, Leon Goretzka and Joshua Kimmich will not only boss most games in possession, but they provide the perfect “second layer” for the pressing done by the front three. They could have scored more and, had they done so, Sane’s error at the end wouldn’t have given them such a fright. They’ll want to improve in one of those two areas: either capitalising better on chances or cutting out the gifts to the opposition.

At this stage, you just want to get through it

National team coaches always want more time with their players, but obviously, it’s the clubs that pay the bills. Under normal circumstances, an international break is sub-optimal, but it still gives you some opportunity to work. The players get together on a Monday and you generally get a solid seven days together at least. You play two games and, when you’re not playing, you bond, you build chemistry and you try to define your identity.

Of course, that’s out the window given the ongoing pandemic. In South America, they called off the World Cup qualifiers altogether. In Europe, they’ve had to shoe-horn three games into eight days, with travel in-between. And what’s more, they’ve had to do it in the midst of the most congested and energy-sapping campaign in history, with clubs looking over their shoulder and begging them not to send players back with injuries.

That’s why, for example, Italy boss Roberto Mancini called up no fewer than 38 players for this break. He started with a 2-0 win over Northern Ireland and made six changes for the next game, a 2-0 win over Bulgaria. Lithuania are up next on Wednesday, and you can probably expect another six changes there.

It’s pretty much the same story for every bigger nation, from France to England to Spain. You give players a run out, and you get points in the bag. You know this is not the time to work on tactics or even experiment. You just want to get through it without incident and hope that guys feel a part of it. But in terms of planning — whether long-term or even just for the Euros this summer — this isn’t it.

It’s like a trip to the DMV to renew your drivers’ licence: you need to fill out your forms, you have to make sure you have your supporting documents and it’s something you need to do, but you’re not going to learn anything. And it won’t be much fun.