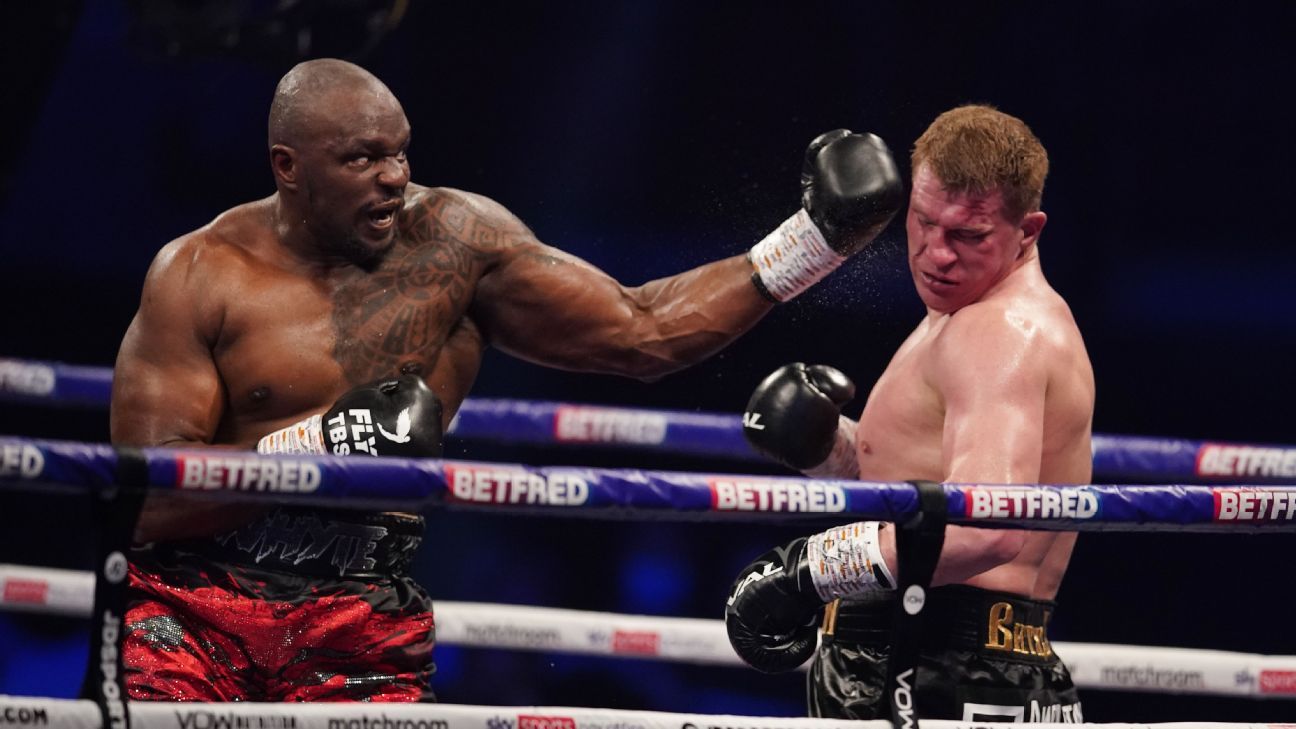 Dillian Whyte is back in world heavyweight title contention after exacting revenge on Alexander Povetkin with a fourth-round TKO win Saturday.

Whyte regained the WBC interim title after flattening Povetkin with a left hook at the Europa Point Sports Complex in Gibraltar, a British overseas territory located on Spain’s southern tip.

Povetkin knocked out Whyte last August, but could not repeat the feat as he was beaten for the third time as a professional. His two other losses came on points to Wladimir Klitschko for the WBA, IBF and WBO titles in 2013 and by stoppage to Joshua for the same belts three years ago.

While Povetkin perhaps considers retirement, Whyte has given his career some much-needed momentum. However, with rival world champions Tyson Fury (WBC) and Anthony Joshua (WBA, IBF, WBO) in advanced talks over a two-fight deal, Whyte’s wait for a first world title shot will go on for some time.

“If he wants a rematch and it’s the right money I will fight him again because I shouldn’t have lost the first time, I’m annoyed at myself,” Whyte said of Povetkin.

“From the first round I was on to him, then I thought I need to relax and not blow up. He’s only lost to Klitschko and Joshua, that shows how good he is. I can beat anyone.”

This was a dangerous, must-win fight for Whyte. Povetkin might be getting on at 41, but in recent years he has proved his power still makes him one of the leading heavyweights in boxing. Last August, Povetkin (36-3-1, 25 KOs) recovered from two knockdowns in the fourth round to knock out Whyte with a left uppercut in the fifth.

Whyte (28-2, 19 KOs), 32, simply could not afford a third career defeat, after also getting stopped by Joshua in 2015. The loss to Povektin cost Whyte first place in the queue for a WBC title shot, and he dropped to No. 6 in that governing body’s rankings. The other three governing bodies do not even rank Whyte in their top 10.

Saturday’s win repairs the damage done to Whyte’s career last summer after beating the most experienced of the heavyweight contenders.

“Tonight was about getting his career back on track and he showed tonight he wasn’t going to be denied, we are back where we wanted to be and the aim remains the same, to get Dillian a shot at the world title,” Matchroom promoter Eddie Hearn, who expects Whyte to fight again in the summer.

Whyte, who moved from Jamaica to London at age 12, let his hands go in the first round and Povetkin was sent staggering from two shots before quickly recovering.

Povektin, who tested positive for COVID-19 causing the rematch to be delayed from November, saw a different side to Whyte in the second as the Londoner boxed patiently off his jab.

Whyte hurt Povetkin with a right in the third round, and the English boxer came out swinging in the fourth. Later in the fourth, Whyte wobbled Povetkin with a one-two, and when the Russian stumbled across the ring, Whyte pounced with a right and a left hook. Povetin hit the canvas, and when he got back up on unsteady legs, the fight was waved off.

Afterward, Whyte fetched a stool for the dazed Povetkin to sit on before he celebrated in front of a limited crowd of 500 due to coronavirus restrictions.

On the undercard, Campbell Hatton — son of former two-weight world champion Ricky Hatton — made a successful professional debut with a 40-36 points win over Spain’s Jesus Ruiz (0-11). Hatton, 20, attacked the body just like his dad used to, and he won every round in a four-round lightweight bout.

“I don’t think I boxed my best, I think my nerves got to me, it can only get better next time,” Hatton said.

Cheeseman, a Londoner nicknamed “The Big Cheese,” landed a barrage of shots and finished Metcalf with a left hook to the jaw at the end of the 11th.

English heavyweight Fabio Wardley (11-0, 10 KOs), trained by Ricky Hatton, scored a fifth-round knockout win over 38-year-old Texan Eric Molina (27-7, 19 KOs). Molina, who was stopped by Joshua and Deontay Wilder in world title shots in 2016 and 2015, respectively, was doing well until 26-year-old Wardley fought back off the ropes with great effect.