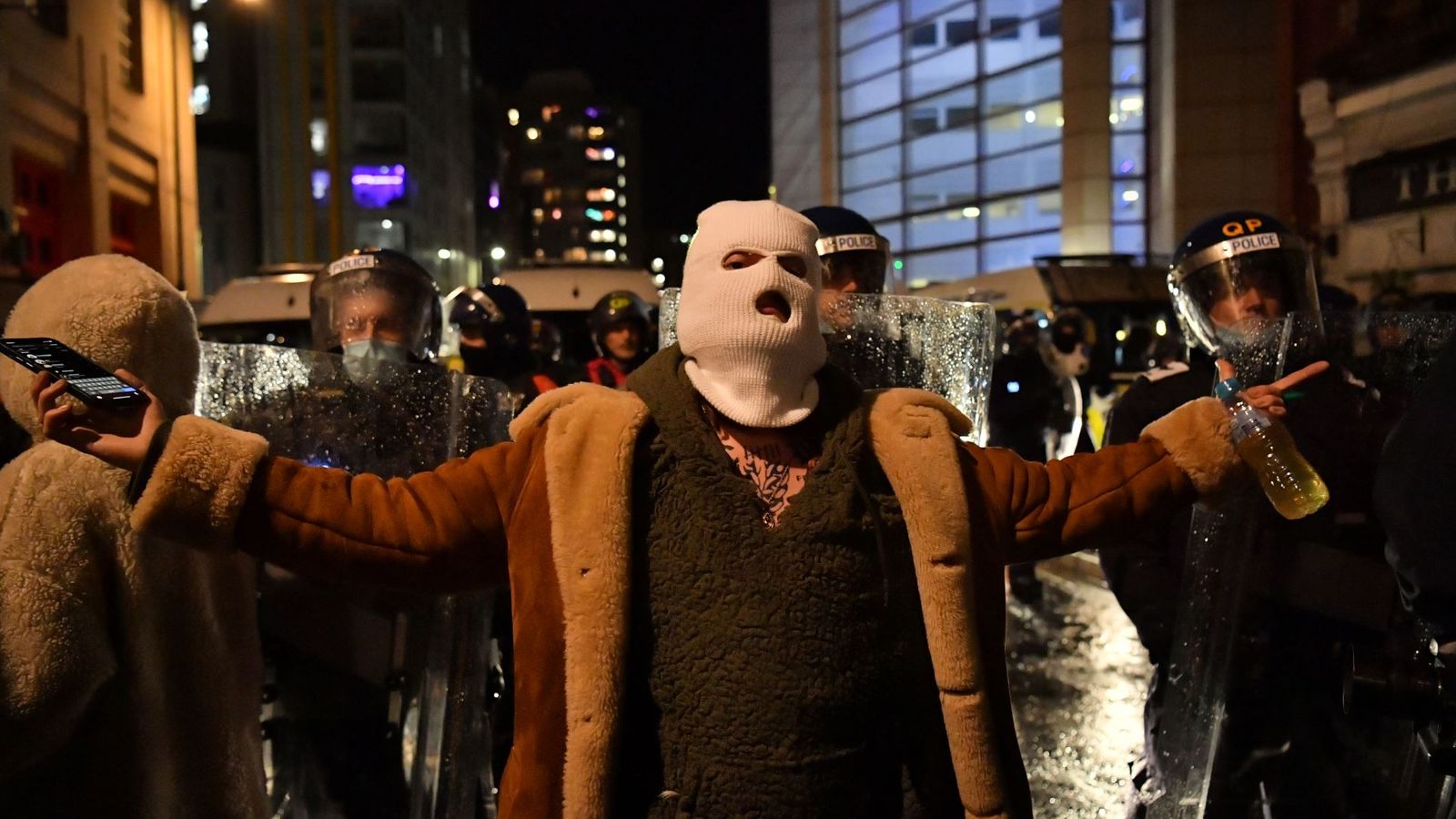 Police have urged people not to participate in further “Kill The Bill” protests in Bristol after more violence broke out on Friday night.

Ten people were arrested after trouble flared when police tried to disperse people in the city centre, where more than 1,000 had gathered. 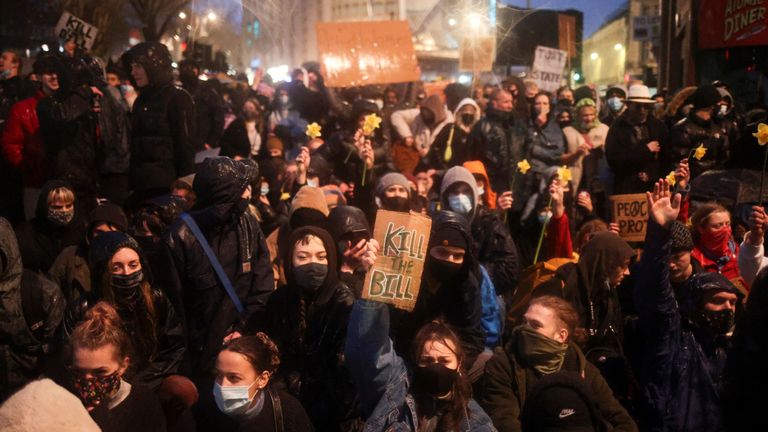 On the frontline of Friday’s protest in Bristol

Some officers also had lasers shone in their faces and a police horse was daubed with paint.

Avon and Somerset Police said people thinking about getting involved in further protests on Saturday night should “reconsider for the sake of the public health”.

Chief superintendent Claire Armes said the illegal gatherings “only put our communities at risk” due to the risk from COVID.

“This pandemic has cost many lives and is still a significant challenge for our colleagues in the NHS,” she said.

“Anyone who chooses to flout the restrictions is playing a part in prolonging this difficult situation.

“We fully understand the strength of feeling around the right to protest, but now is not the time. We’re again asking people to please do the responsible thing and stay at home this weekend.”

Boris Johnson tweeted that police had his full support and that the trouble was caused by a “mob intent on violence and causing damage to property”.

Home Secretary Priti Patel said “despite repeated warnings to disperse, it’s clear these thugs were only intent on causing trouble”.

The condemnation follows violence last Sunday, when 21 officers were injured in the city – two seriously – with vehicles set alight and a police station attacked.

More unrest followed on Tuesday night when 15 people were arrested.

Protesters have been demonstrating against the new Police, Crime, Sentencing and Courts Bill – which gives powers to tackle non-violent protests, including those deemed too noisy or a nuisance.

Before Friday’s violence, protesters had been dancing, handing out flowers and chanting slogans such as “Who do you protect?” and “Justice for Sarah”, in reference to Sarah Everard‘s killing.

Kill The Bill protests also took place in other cities on Saturday, including Bath, Brighton, Sheffield and Manchester, where 18 people were arrested.

Bristol mayor Marvin Rees has said he is concerned about “people travelling into our city to protest or to cause conflict”.

Posting on Facebook, he said: “The question those engaging in the action should be asking is: is what I am doing advancing the cause I claim to be campaigning for?

“Many people protested peacefully but there are a number who refuse to go home and others who are here merely to cause conflict: the Bill itself is not their cause, it is their opportunity.”

“The actions make the Bill more likely and protesting in Labour-led Bristol does not put any pressure on the Conservative MPs who will be required for the Bill to pass,” he added.

ACC football schedule release: Every game for every team in 2023
‘No excuse for dodging scrutiny’: Labour demands report on levelling up progress
Tory MPs challenge chancellor on tax cuts and fuel duty
Trump kicks off 2024 White House bid – and says he’s ‘more committed than ever’
Putin threatened to kill me with a missile before Russia invaded Ukraine, says Johnson