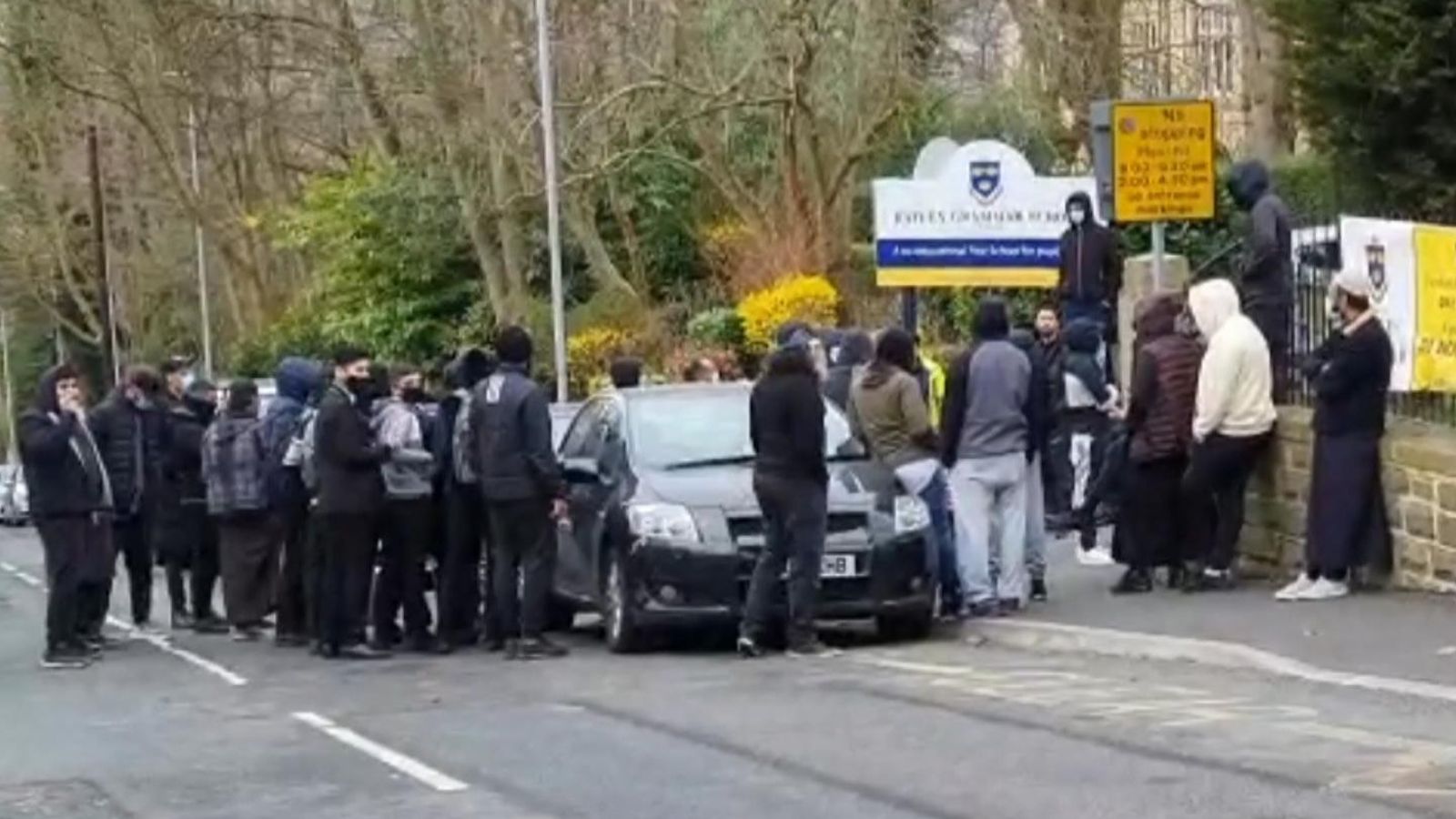 A protest that took place outside a school after a teacher showed a caricature of the Prophet Mohammed in a class was “completely unacceptable”, the Department for Education has said.

Dozens of people, including parents, had gathered outside Batley Grammar School in West Yorkshire on Thursday morning to demonstrate.

A teacher has been suspended and the school has apologised for using the image, admitting it was “totally inappropriate”.

Depictions of the Prophet Mohammed are considered deeply offensive in the Muslim faith.

One parent at the school said the cartoon was taken from Charlie Hebdo, the French satirical magazine that was attacked in 2015 by Islamist terrorists who killed 12 people in Paris.

On Thursday evening, a Department for Education spokesperson said: “It is never acceptable to threaten or intimidate teachers. We encourage dialogue between parents and schools when issues emerge.

“However, the nature of protest we have seen, including issuing threats and in violation of coronavirus restrictions are completely unacceptable and must be brought to an end.”

The spokesperson added: “Schools are free to include a full range of issues, ideas and materials in their curriculum, including where they are challenging or controversial, subject to their obligations to ensure political balance.

“They must balance this with the need to promote respect and tolerance between people of different faiths and beliefs, including in deciding which materials to use in the classroom.”

The caricature was shown to students in a lesson on 22 March, according to a letter to parents seen by Sky News.

Head teacher Gary Kibble said on Thursday: “The school unequivocally apologises for using a totally inappropriate image in a recent religious studies lesson. It should not have been used.

“A member of staff has also relayed their most sincere apologies. We have immediately withdrawn teaching on this part of the course and we are reviewing how we go forward with the support of all our communities represented in our school.

“It is important for children to learn about faiths and beliefs, but this must be done in a respectful, sensitive way.

“A member of staff has been suspended pending an independent formal investigation.”

People had gathered outside the school to demand the resignation of the teacher involved.

A police officer read a statement from Batley Grammar as protesters shouted that they wanted the member of staff “sacked”.

The letter to parents read: “The school would like to thank the parents who contacted us on Monday 22 March highlighting concerns with a resource used in an RS lesson that day.

“Upon investigation, it was clear that the resource used in the lesson was completely inappropriate and had the capacity to cause great offence to members of our school community, for which we would like to offer sincere and full apology.”

In a letter addressed to Mr Kibble and shared online, founder of Batley-based charity Purpose Of Life, Mohammad Sajad Hussain, said he was “deeply hurt” by the “insulting caricatures of our beloved Prophet Mohammed”.

Yunus Lunat, an executive member of the Indian Muslim Welfare Society in Batley, told Sky News he thinks the teacher “went off script” and was trying to “provoke”.

“You will never see an image of the Prophet Mohammed in our mosque, in any mosque in the world. It’s not acceptable.”

He added: “That gives you some sense of understating as to why these cartoons cause aggravation.”

Mr Lunat said he also fears the debate may be “hijacked” by people not directly related to the school.

West Yorkshire Police said it was called to the protest at around 7.30am on Thursday.

A police spokesman said the school road had been closed for a short time, no arrests were made and no fines were issued.

The National Secular Society called the demonstration an “attempt to impose an Islamic blasphemy taboo on a school”.

The society’s chief executive, Stephen Evans, said: “Teachers must have a reasonable degree of freedom to explore sensitive subjects and enable students to think critically about them.

“And the school’s weak response will fuel a climate of censorship, which is brought on by attempts to force society as a whole to accommodate unreasonable and reactionary religious views.”

Tory MPs challenge chancellor on tax cuts and fuel duty
Save 49% on ALLPOWERS’ 200W foldable solar panel at low of $239 in New Green Deals
PM was told of Raab’s ‘unacceptable behaviour’ before appointing him to cabinet
Quick Charge Podcast: February 2, 2023
No 10 admits ‘very difficult’ day ahead as hundreds of thousands of workers go on strike