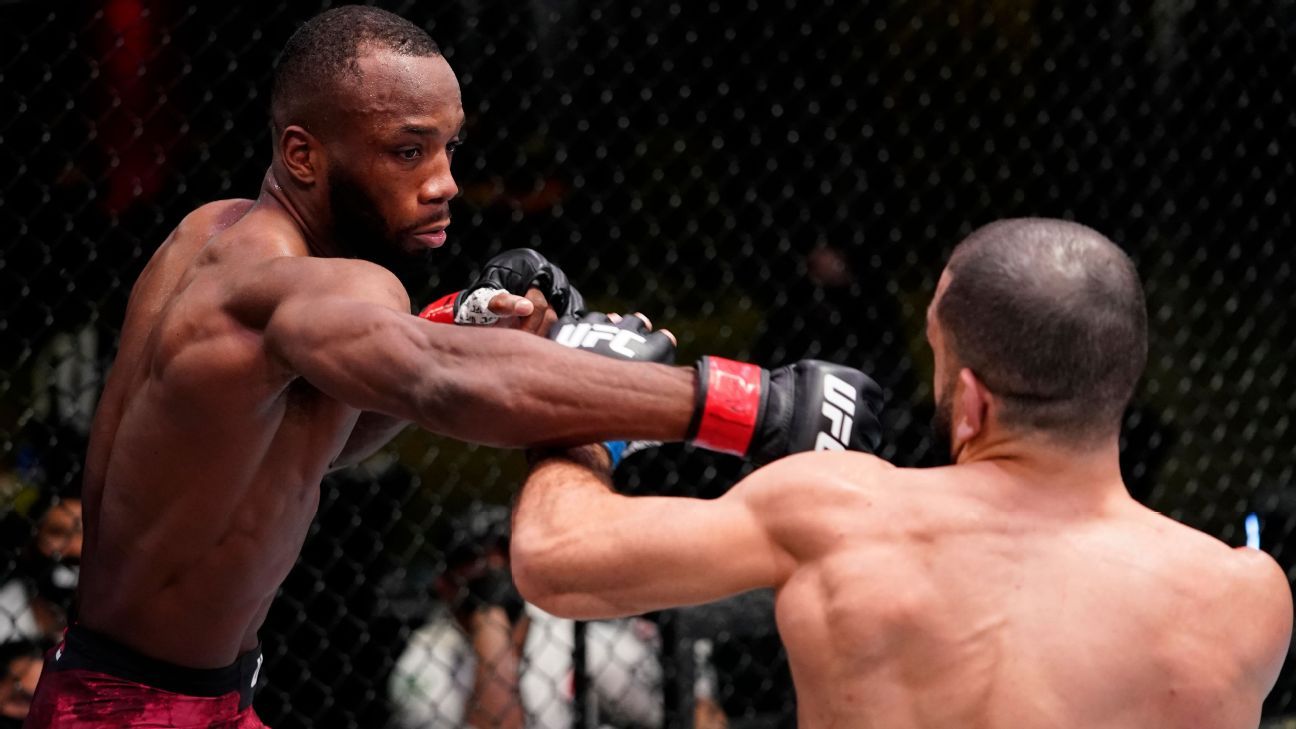 Leon Edwards‘ first fight since mid-2019 ended prematurely in Saturday’s UFC Fight Night main event when he accidentally poked Belal Muhammad in the eye, ending the bout in a no contest. After such a long period of inactivity, one major question hangs in the air — how far away is Edwards from the welterweight title shot that has long eluded him?

Saturday also featured the second fight in as many weeks to end with an illegal knee as Eryk Anders landed a knee to the head of a grounded Darren Stewart in the first round. It was ruled unintentional and resulted in a no contest. On March 6, Petr Yan lost his bantamweight title when he kneed a grounded Aljamain Sterling in the fourth round. That blow was ruled intentional. Is it time for a look at the rules and the amount of leeway given to referees?

The UFC middleweight division is in flux following champion Israel Adesanya’s unsuccessful challenge for light heavyweight champion Jan Blachowicz’s belt. The jockeying for position has begun, and Saturday’s main eventers are each riding a wave of momentum. Derek Brunson, ESPN’s No. 9 middleweight, is on a three-fight winning streak. Kevin Holland was arguably the biggest breakout star of 2020, winning five straight fights from May through December.

As the summer schedule for the UFC starts to take shape, questions about some of the biggest names in MMA loom. After largely cleaning out the list of top contenders in two divisions, Amanda Nunes seems to be headed towards a fight at 135 pounds against Julianna Pena. Is that the best fight on the table right now? And is there hope for a future contender to emerge at 145, like the PFL’s up-and-coming lightweight standout Kayla Harrison.

Finally, the UFC is targeting a fight between Tony Ferguson and Beneil Dariush for UFC 262. Is that a smart fight for Ferguson, and something that can get him back on track after a pair of tough losses?

Our panel of Ariel Helwani, Marc Raimondi, Brett Okamoto and Jeff Wagenheim breaks it all down to separate what’s real, and what’s not.

Leon Edwards will ultimately get a welterweight title shot

Helwani: Sure, that’s real. But I don’t think it’s happening next.

Here’s why: the current plan is for Kamaru Usman to defend the welterweight title next against Jorge Masvidal later this year (likely in the late summer/early fall). The winner of that fight would only be ready to fight again in late 2021 or the first quarter of 2022. I highly doubt Edwards wants to wait that long to fight again. And if he does, I’d strongly suggest otherwise. The man needs to fight and get paid, not sit around and wait.

So, that’s why I think his next fight has to be against one of three people:

It doesn’t sound like the Muhammad option is of much interest to Edwards, and I don’t blame him, even though it would be totally fair and justifiable considering how it ended. Edwards wants to move on and get closer to the title shot, and beating Muhammad doesn’t necessarily do that. Ultimately, he needs a big name W on his resume. Covington — and to a lesser degree Burns — represents that.

“I have worked my way back up from last getting defeated by Kamaru Usman. I have fought everybody, I have offered to fight everybody.”@Leon_edwardsmma believes he deserves a title shot next. pic.twitter.com/kvuLoLg1cb

Rather than alienating fans by campaign for a title shot he likely won’t get, Edwards should be campaigning for a fight against one of those guys to get the title shot he so craves in 2022. I don’t doubt for a second that he can get that title shot next year, but he still needs to get over one more hump before doing so.

After a late strike like Petr Yan’s or Eryk Anders’, referees should just rule it a DQ

Raimondi: I have to say “not real” here. I do think it’s important that referees have some leeway to determine whether a fight is a disqualification, no-contest or technical decision. While the illegal knees from Yan and Anders were awfully similar, came in back-to-back weeks and ended up with different rulings, those occasions are rare. Not every foul triggering a fight-ending sequence is created equally. Of course, more consistency is needed across the board, but MMA is not a black-and-white kind of sport. Ruling everything a disqualification sounds great now after these two incidents, but if that becomes codified as rule it won’t be long before a truly unintentional, accidental foul ends a fight and the fighter who committed it gets a loss on his or her record.

Regarding Yan at UFC 259, I actually think referee Mark Smith did the best job he could do in that situation. He asked Aljamain Sterling if he was able to continue on. Now, that decision isn’t really Sterling’s to make — a fighter will almost always choose to fight on. That is their nature. The referee, though, is the one who makes the final call in that situation, with potential advice from the ringside physician. In the instance of Sterling, Smith was taking his time, observing Sterling’s condition and getting input from the doctor.

Everyone wanted the contest to continue, so Smith was giving Sterling all the time he could to recover and potentially fight on. Of course, Sterling was in no condition to do that. Smith ultimately — and rightly — called the fight off. His determination was that Yan’s knee was flagrant and intentional, thereby awarding Sterling the disqualification victory.

I’ve seen some misconceptions that Smith was putting the onus on Sterling regarding whether the fighter could continue. He was not. In those situations, it doesn’t really matter what the fighter says — it’s what the referee observes. The referee is looking for body language, looking into the fighter’s eyes. The same kinds of things refs do when they’re determining whether or not to stop a fight due to TKO. Mistakes are made, but that’s their job and they are experts at it.

Now, if we delve into what should be a disqualification, what should be a no-contest and what should be a technical decision, that gets a bit more confusing. There could and should be more consistency when it comes to the interpretation of fouls by referees. Some referees are inclined to give the fighter the benefit of the doubt, determine a foul is unintentional and rule a no-contest or go to the judges for a technical decision. Others are more rigid, quicker with a determination that a foul was intentional and ruling a disqualification.

That does not mean we should take the choice out of the referee’s hands. Hard and fast rules that seem to make sense on paper never actually work out that way in practice in a fluid combat sport like MMA.

Julianna Peña is interesting, but the only fighter who is a legit threat to Amanda Nunes is Kayla Harrison

Wagenheim: There’s a lot to unpack in that two-part statement, but the bottom line is that, no, it’s not real. Harrison is not a legit threat to Nunes, not even close. She might be a threat someday, but there are obstacles in her way. She competes in a different weight class (lightweight) in a different fight promotion (PFL) — at least until her contract is up in 2022. But the biggest thing separating these women is skill level, which is at least in part a byproduct of an experience gap.

Although Harrison put in over a decade at the highest level of international judo, she has been in just eight pro MMA bouts. None of those fights were against anyone in the same universe as Nunes, who has had 25 MMA bouts and has not lost one since 2014. That loss came a few weeks after Harrison won the world judo championship and began preparing for the 2016 Olympic Games, where she would win her second gold medal. She didn’t make her MMA debut until 2018.

These two women train at the same gym, American Top Team in Coconut Creek, Florida, and I suppose that familiarity could play in Harrison’s favor, demystifying the daunting aura of the GOAT. But Harrison has a lot of catching up to do, and still fights one weight class above 145. She fought for the first time at featherweight for Invicta in November, but by the time she’s ready to consistently fight at featherweight, and fighting in the same cage her teammate currently calls home, will Nunes even still be in the game? She’s 32 and has already talked about retirement.

As for Peña, she’s a solid 135-pounder who maybe sits at the head of the line for a title shot, considering that the only fighter ahead of her in the ESPN women’s bantamweight rankings, Germaine de Randamie, challenged (and lost to) Nunes just 15 months ago. However, de Randamie subsequently fought Peña last October and finished her. So giving the title shot to Peña, who is 2-2 in her last four fights and owns not a single victory over anyone in the ESPN top 10, seems off to me.

Maybe I was just put off by Peña’s interview last week with my colleague Ariel Helwani, during which she showed Nunes not an ounce of respect. Trash talk, I know. But to push an unfathomable alternate reality in which the two-division champ is running scared? That’s treating the fans like idiots. We know who’s a fighter and who’s not, and Amanda Nunes, I assure you, is as fearsome a fighter as there ever has been. Last time I saw her run, she didn’t look scared. It was Dec. 29, 2018, and Nunes was racing around the cage in unbridled celebration, a shiny belt draped over each shoulder, moments after she added her second UFC championship.

Beneil Dariush is a bad matchup for Tony Ferguson

Okamoto: Real-ish. Look, right now, anyone in the Top 10 is potentially a bad matchup for Ferguson, because for the first time in his career we don’t really know what we’re getting out of him.

He looked absolutely lost in his last two fights against Justin Gaethje and Charles Oliveira. He’s 37 years old, and it’s not a “young” 37 years old. He’s been in back-and-forth wars. He’s gone through injuries. And he always had a style that made him a candidate for, “When it goes, it’s going to go fast.” He takes damage, and that’s just not a style that typically leads to a lot of wins in your late 30s.

All that said, Ferguson’s 2020 could have been an anomaly. He cut weight twice in a short period of time before that Gaethje fight. His camp was prolonged. For Oliveira, that fight kind of came together on short notice, and Oliveira is on a serious run right now. Ferguson could have a huge bounce back in 2021. I don’t think any of us would say that’s impossible. But this first fight is a tough one, no doubt. Dariush is good everywhere. There’s no obvious area in which to attack him. But if there weren’t questions about what Ferguson has left in the tank, he would be the favorite.

So, stylistically, no, this isn’t a terrible matchup. But the questions about where Ferguson is in his career are very legitimate.

‘Nobody is born smart’: Ex-commander of Russian mercenary group apologises for fighting in Ukraine
XPeng opens orders for G9 SUV and updated P7 sedan to these four countries in Europe
Way-too-early tennis rankings and predictions for the rest of 2023
Meta shares soar almost 20% on fourth-quarter revenue beat
Simpsons episode where Homer goes on strike shown by Channel 4 on ‘Walkout Wednesday’